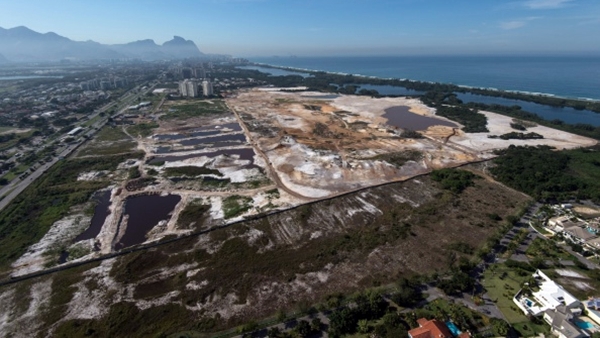 Judge Eduardo Klausner, hearing a lawsuit brought against the city of Rio de Janeiro and the course developer, said the defendants had to return Sept. 17 to say if they could accept the proposal. Klausner said work on the course could continue, but no new areas of vegetation could be plowed under.

In recent months, workers have been putting down grass on the course, with the hope of finishing by the end of the year. That would give the turf two growing seasons to mature.

Golf’s return to the 2016 Olympics after 112 years was to be a centerpiece of the Rio de Janeiro Games. But the course has been plagued by legal challenges over land ownership, questions about its location in a nature reserve, and other delays that date almost five years.

Mario Andrada, a spokesman for the local Olympic organizing committee, tried to find an upside.

“We are happy the construction on the course has not been stopped,” he told The Associated Press. He declined further comment.

In a raucous, at times chaotic two-hour-long hearing, Klausner heard from environmentalists, biologists and Rio city hall’s top environmental official, as well as attorneys from both sides.

Klausner played the role of mediator, nudging the public prosecutors, who brought the suit, to offer a proposal that would preserve as much of the Atlantic rainforest area as possible while allowing the course work to continue.

Isabela Lobato da Silva, a forest engineer with the state environment secretariat who visited the forested area before construction on the course began, said that while some forested areas have already been destroyed, the damage was not irreversible. She proposed the creation of a 400 metre-(yard-) wide corridor to allow for the circulation of animals between the wooded areas on either side of the course.

A biologist hired by the developer said that because the course layout has been set, it would prove difficult for it to be modified. The city’s Environment Secretary, Carlos Alberto Muniz, said that 10 days was too short to get approval from all parties including the local organizing committee.

A spokesman for the Switzerland-based International Golf Federation wasn’t immediately available for comment. However, in a recent interview Ty Votaw, vice-president of the IGF, said there were alternative plans if changes demanded them.

Also at the British Open, Votaw hinted the course was not going be as good as it could be.

“It’s probably not going to be as perfect as our ideal situation would be,” he said.

Course architect Gil Hanse has been encouraged in recent months as grass has been sewn. Organizers hope for a test event late in 2015 or early in 2016.

Activists suggested that financial and real estate interests, and not any real need for a new course, were the behind the push to build the Olympic course. Klausner stated it was not for him to judge the merits of another golf course specifically for the Olympics – Rio already has two.

The developer of the course project is Italy-born Pasquale Mauro, one of the largest landowners in the Barra da Tijuca area.

Plans call for the course, being built in suburban Rio near the heart of most games’ venues, to be public after the Olympics. However, this egalitarian ambition seems at odds with what’s to be built alongside the course on some of the area’s last undeveloped real estate.

A complex of 160 luxury apartments in four 20-story towers is to go up overlooking the course. Prices range from about $2.5 million to $7 million with completion set for a year after the Olympics end.

Environmental activist Marcello Mello, who has been campaigning against the golf course, hailed the proposal as a victory, though he added “we wanted to see the entire course moved.”