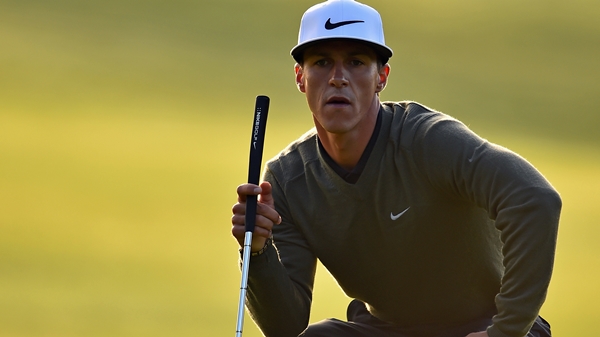 PERTH, Australia – Thorbjorn Olesen of Denmark and John Wade of Australia shot course-record 8-under 64s at the Lake Karrinyup Country Club to share the lead after the first round of the Perth International on Thursday.

Olesen teed off in an afternoon group and had four birdies on each of the front and back nines to equal the mark that Wade, a 46-year-old assistant pro at the Commonwealth Golf Club in Victoria state, set in the morning.

“I played really, really well the front nine. I gave myself a lot of chances there,” Olesen said. “Especially my short game was amazing out there. My chipping and bunker shots were really, really good.

“The greens are perfect, layout is great.”

Wade could barely believe his opening round, after qualifying earlier in the week for the jointly sanctioned European Tour and Australasian Tour event.

“I’ve really been struggling recently, even in the lead-up,” he said. “This is all new to me. I’ve just got to go out with the same attitude tomorrow.”

Michael Sim of Australia, Peter Whiteford of Scotland, Kim Shi-wan of South Korea, and Tom Lewis of England were tied for third at 6 under.

In a group a stroke further back were Australians Brett Rumford, Matthew Griffin and Jason Scrivener, David Drysdale of Scotland, Mark Foster of England, Julien Quesne of France and Magnus Carlsson of Sweden.

Charl Schwartzel sank a long putt on his last hole to finish with a 68 and a share of 14th spot.

American Jason Dufner, the 2013 U.S. PGA champion, had a 70 in his first competitive round in almost three months since withdrawing from the U.S. PGA Championship with a neck injury.

Dufner was a stroke ahead of Victor Dubuisson, who mixed four birdies with three bogeys in a 71, and two clear of defending champion Jin Jeong of South Korea.