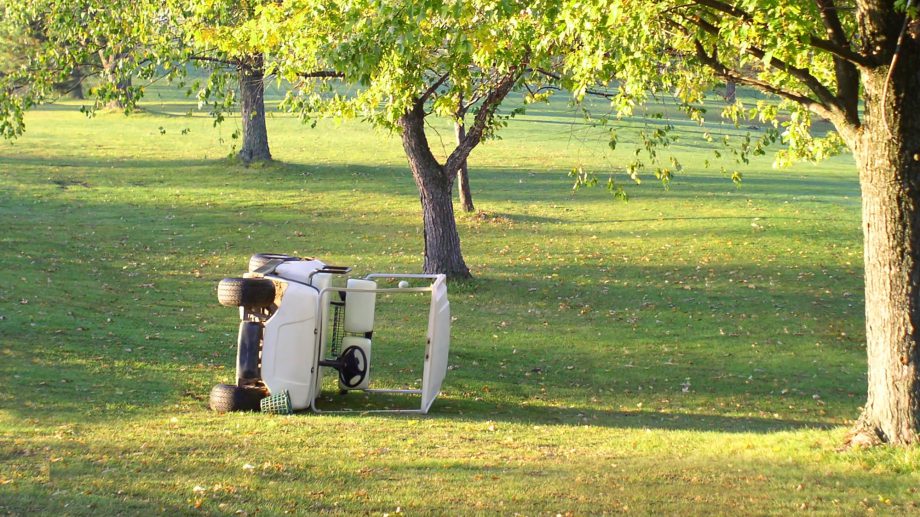 Wrecked golfcart abandoned and flipped on its side lying on the golf course.
John Gordon

No matter how many times we talk about the benefits and amenities included with a Golf Canada membership (most recently, here), it doesn’t strike home until, well, it strikes home.

A little while ago, I saw a tweet from a member at a local golf club.

“Somebody stole my putter out of my bag while I was at the range right before my match. My red TaylorMade Spider…,” he lamented, adding a few expletives directed at the thief.

At last check, that putter retails for close to $400. He thought he was out of pocket for a replacement.

“So sorry this happened,” messaged the director of golf. “But glad you are a member of @golfcanada which includes reimbursement for these situations.”

He was unaware of that. And, most likely, so are you.

Golf Canada’s Incident Protection provides up to $2,500 reimbursement for damaged, lost or stolen equipment, among several other advantages you may not be aware of.

Like the fellow mentioned previously, you may think it will never happen to you. But it can. And will.

Like the guy at my club who placed his clubs and bag behind his car and then backed over them.

And if you’re travelling this winter or any time for that matter, your Golf Canada membership protects you.

For example, airlines may or may not reimburse you for accidental or intentional incidents but that’s small consolation.

Team Canada member Maddie Szeryk was on her way to her first tournament of the year at Texas A&M when her clubs came down the airport carousel. The heads of her driver, 3-wood and 5-wood were snapped off.

Golf and travel writer Ted McIntyre has a similar story. “As a frequent traveler, I am a master club packer but had the head fall off my driver when I opened my travel case. Can’t imagine how far they must have fallen upside down for that to occur.”

There are myriad examples. Prior to the Ryder Cup, Denmark’s Thorbjorn Olesen lost not one but two sets of clubs in 10 days. This summer, Graeme McDowell’s clubs disappeared during a flight and he was forced to withdraw from final qualifying for the Open Championship. Another PGA TOUR pro’s clubs went missing thanks to the airline and were discovered for sale at a used sporting goods store.

Do you play a course with adjacent homes? Do you occasionally miss a tee shot? (Rhetorical question.) If you break a window, you’re covered up to $1,000 for the damage you caused.

Golf carts are convenient but as motorized vehicles, they come with risks. If you have an incident while driving one, a Gold-level membership covers you for damages up to $2,500.

As a Gold-level member, you also receive a set of identification labels to affix to your clubs in the event that you misplace one.  Anyone finding it can report it through an online notification system. You will receive an email immediately and be reunited with your club.

Along with providing an official Handicap Factor, these are the main benefits of your Golf Canada membership.

Think it can’t happen to you?

Most likely, these folks didn’t either but when it did, they were relieved to find that their Golf Canada Gold-level membership was there to protect them.

So far this year, according to stats provided by Golf Canada, there were 189 claims for which almost $115,000 was paid out in restitution. Of those claims, 119 were for clubs and other equipment, 39 for window damage and the remainder for various other deductible incidents.

Some examples from claimants:

“Driving cart and strap that holds bag onto cart broke and bag fell off. My driver was in two pieces.”

“The remote-control caddie went into a pond. Retrieved right away but has not worked since.”

“Hit a drive and the ball hit a cart path and went through a residential window.”

“Push cart with clubs rolled down a steep slope and ended upside down in a water hazard.”