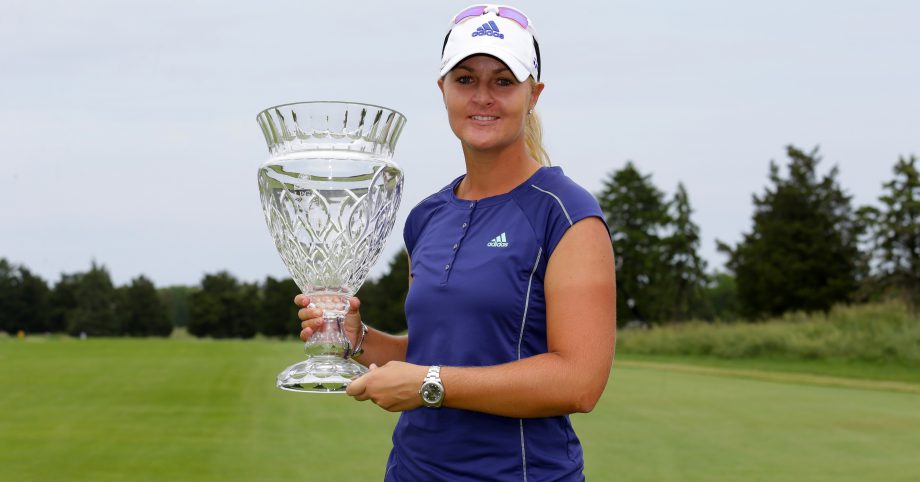 The 28-year-old Swede became the oldest tour winner this year by more than five years and the first to successfully defend a title since Inbee Park won the KPMG Women’s PGA for the third straight time last year.

“It feels really special, because I’ve been playing pretty good all spring,” Nordqvist said. “I just haven’t really got any results, and it just really got frustrating. … I’m very proud of myself for sitting here again. Just any time you can win on tour, it’s a special moment. It’s just getting tougher. The competition is getting really tough.”

Nordqvist finished at 17-under 196 on Stockton Seaview’s Donald Ross-designed Bay Course to tie the tournament record that Annika Sorenstam set in 1998 and matched in 2005. The 6-foot former Arizona State player earned $225,000 for her sixth tour title. She opened with rounds of 64 and 68.

“My team deserves a huge credit for just keep pushing me to stay patient and keep believing in myself, because there were times where I was hitting it really well and just couldn’t get anything out of it,” Nordqvist said. “Sitting here now, it almost feels even sweeter, being back in the winner’s circle, just knowing that I’ve been playing well, I have been staying patient, and it finally paid off.”

Nomura, a two-time winner this year, was second after a 66. The Japanese player birdied the par-5 18th.

Nomura was the previous oldest winner this season at 23.

Nordqvist birdied three of the first four holes and added birdies on Nos. 8 and 9 to make the turn in 5-under 32. She also birdied the par-4 12th and 16th.

“You’re just trying to hit a lot of greens,” Nordqvist said. “I hit 17 greens and I just missed the last one. Just tried to control the ball in the wind, hitting fairways, hitting greens, and I think that’s always been one of my keys on this course.”

Projected to jump from 19th to 16th in the world ranking, Nordqvist is the first European winner on the tour since Suzann Pettersen won the Manulife LPGA Classic last June.

“I was a couple shots behind, so I knew I had to post a really good score,” Nordqvist said. “After a good start, I just tried to keep my focus, and can’t really take anything for granted. You lose your focus a little bit, and that’s when you are going to start missing shots.”

“It just fits my eye,” Nordqvist said. “I think smaller greens, it narrows down my focus a little bit. You really get distinct fairways here. I like wind and I like challenges. I wish I knew what the recipe was, or is, but I just feel very comfortable coming here and I feel very confident.”

Brooke Henderson, of Smiths Falls, Ont., finished the tournament with a 4-under 209 and tied for 45th. The 18-year-old was coming off a third-place tie last week in Ann Arbor, Mich.

Samantha Richdale of Kelowna, B.C., was the top Canadian at 7-under 206 and tied for 14th. Maude-Aimee Leblanc of Sherbrooke, Que., tied for 31st while Quebec City’s Anne Catherine Tanguay tied for 55th.

France’s Karine Icher, the second-round leader after matching the course record with a 62, birdied the 18th for a 69 to finish third at 14 under. She’s winless on the tour.

Christina Kim was fourth at 13 under after a 65. She finished second last week in Michigan, five strokes behind winner Ariya Jutanugarn.

Stacy Lewis, the winner in 2012 and 2014, had her second straight 74 after an opening 66 to tie for 67th at 1 over. The 31-year-old Lewis is winless in 50 starts since taking the North Texas LPGA Shootout in June 2014 for her 11th tour victory. She tied for second last month in Alabama, her 10th runner-up finish during the drought and 23rd overall.

Top-ranked Lydia Ko and the streaking Jutanugarn skipped the tournament to get ready for the KPMG Women’s PGA, the second major championship of the year that starts Thursday at Sahalee near Seattle. Jutanugarn has won three straight events.