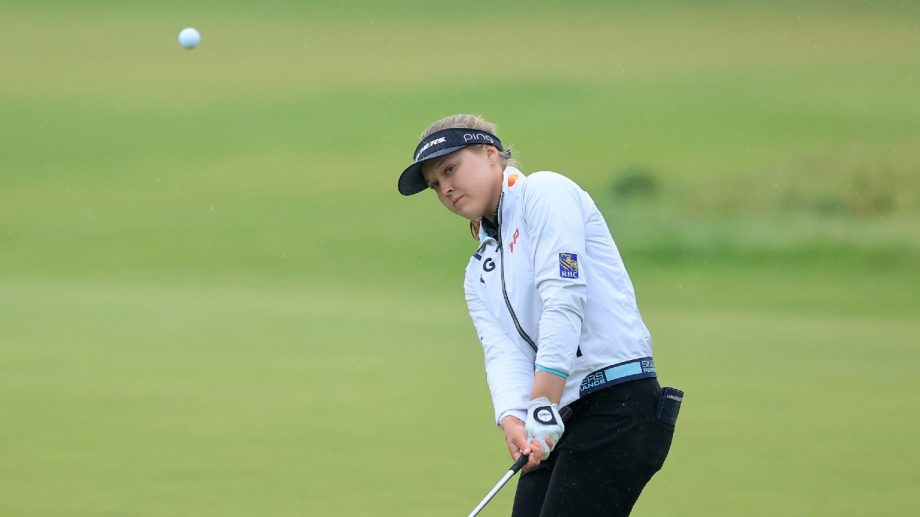 CARNOUSTIE, Scotland (AP) Anna Nordqvist and Nanna Koerstz Madsen, Scandinavians with contrasting resumes in golf, share the lead heading into the final round of the Women’s British Open.

A bunched-up chasing pack, containing Nelly Korda and Lexi Thompson, promises to make it a Sunday to remember at Carnoustie.

In the toughest conditions of the week on the storied Scottish links, the 34-year-old Nordqvist a two-time major champion from Sweden shot her lowest round in one of women’s golf’s five elite events with a bogey-free, 7-under 65 on Saturday.

Koerstz Madsen, a 26-year-old Dane with just one top-10 finish in a major, joined Nordqvist on 9 under overall by rolling in a 15-foot eagle putt at No. 12 and parring her way home down Carnoustie’s tough closing stretch to shoot 68.

They were a stroke ahead of Lizette Salas of the United States, whose up-and-down at the last completed a round of 70 that didn’t include a bogey from the fifth hole.

Yealimi Noh wasn’t so lucky. The 20-year-old American held at least a share of the lead for much of a third round that lived up to the “Moving Day” tag, only to drop shots on her final three holes and finish at 6 under with a 71.

That left Noh tied for eighth place with a star-studded group containing Korda (70), the recently crowned Olympic champion and new superstar of women’s golf, and two players who have won the Women’s Open in the last five years 2018 champion Georgia Hall (73) and 2016 winner Ariya Jutanugarn (68).

The top 14 were separated by just three shots going into the final round. Thompson, whose only major win was in 2014, was in a four-way tie for fourth place after a 70.

Perhaps the most unlikely player alongside Thompson on 7 under was Louise Duncan, a 21-year-old Scottish amateur who goes to Stirling University in her home country.

She gave a fist pump after making birdie at No. 8 for a 68 to stay in contention for much more than the Smyth Salver that is awarded to the leading amateur.

“The crowd was absolutely loving it and so was I,” Duncan said, “and to hole that putt tops it off as well.”

Duncan won’t be the only player counting on local support on Sunday.

Brooke Henderson heated up in the third round, with 3 birdies in a row. Completing the round with 6 birdies and shooting her way 3 back from the lead. Henderson sits tied for the 8th spot moving into the final round.

Nordqvist, who won the LPGA Championship in 2009 and the Evian Championship in 2017 for her two majors, said her husband was from a place 20 minutes away from Carnoustie and that many of his friends and family had been at the course.

“I am definitely feeling their support,” she said.

She is also mindful of the 2011 Women’s Open at Carnoustie, when she tied for seventh for her joint-best finish at the tournament, and she climbed 22 places Saturday.

A 25-foot putt for birdie at No. 8 was her highlight, along with the 230-yard approach at the 17th that set up her seventh and final birdie of the round.

At one stage, Nordqvist was in a five-way tie for the lead at 7 under, with Hall who shared the overnight lead Noh, Madelene Sagstrom and 2019 champion Hinako Shibuno.

Noh was the last one of those players to fall away, although Sagstrom another Swede bounced back from a double-bogey 6 at No. 9 with two straight birdies and then seven pars to finish for a 69. She was with Thompson, Duncan and Sanna Nuutinen (68) on 7 under.