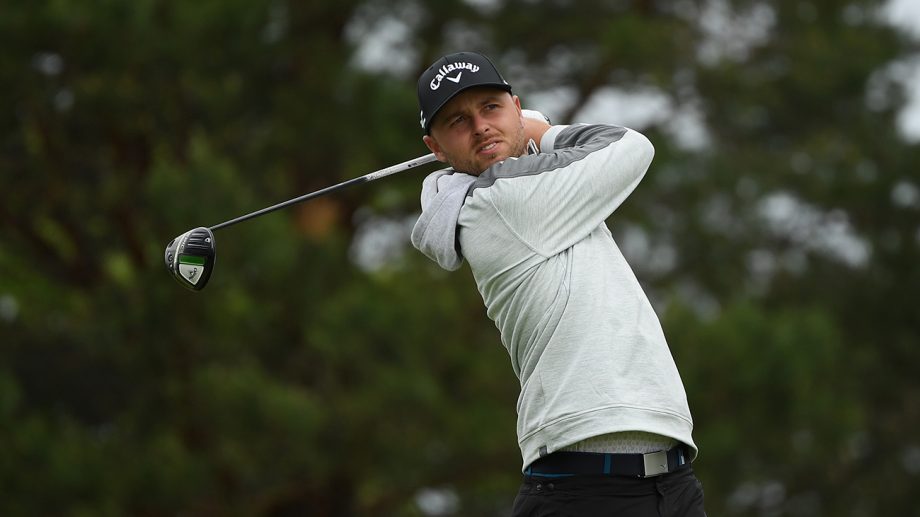 GLENVIEW, ILLINOIS - MAY 27: Adam Svensson plays his tee shot on the second hole during the first round of the Evans Scholar Invitational at the Glen Club on May 27, 2021 in Glenview, Illinois. (Photo by Quinn Harris/Getty Images)
Korn Ferry Tour Communications

GLENVIEW, Ill. – Nick Hardy, one of roughly a dozen players in the Evans Scholars Invitational presented by First Midwest Bank field with local ties, had no issues navigating the kind of chilly, windy morning one would experience at a Chicago Bears tailgate. New Yorker Cameron Young actually enjoyed his first four holes in the same conditions, because once he reached the fifth fairway, scattered rain showers blew in and turned Thursday afternoon into one of the most miserable golf rounds he ever endured.

Hardy and Young emerged from the wicked Chicago area weather with matching 7-under 64s, finishing the opening round with a one-stroke edge over Canadian Adam Svensson.

Stuart Macdonald shot a 68, while both Taylor Pendrith and Ben Silverman shot 69 to put all four Canadians inside the top 20 after the first round.

A native of Northbrook, Illinois, Hardy has a share of the 18-hole lead for the third time in 42 starts on the Korn Ferry Tour. Young sits atop the leaderboard for a fifth consecutive Korn Ferry Tour round, as he turned in a wire-to-wire victory (solo leader after every round) amid rainy conditions at last week’s AdventHealth Championship.

Hardy eagled his opening hole, the par-5 first, countered his only bogey of the day (a three-putt five on No. 3) with one of his six birdies the following hole, and snuck a 6-foot par putt in the side door at the par-5 18th to tie his lowest first-round score on the Korn Ferry Tour.

“It was a tough day. Everything is tough with that much wind,” Hardy said. “The greens are fast, so you’ve got to control your pace really well, and predict the wind well on putts. I was unhappy I blew it by about six feet and (had) a sidehill putt (on No. 18). I was definitely antsy to make that. I just took the absolute high line because I didn’t want to four-putt… tried to drip it in, and I hit a great putt. Luckily, it caught the right side of the hole and went in.

Hardy also caught a break at the par-3 17th. As his tee ball sailed 25 yards left of his target and dangerously close to the water, Hardy just hoped for a kind bounce. The ball landed softly enough it hung up in the rough within the penalty area. Hardy took advantage of his good fortune, saving par there and narrowly avoiding a three-putt bogey at the 18th.

“I thought it was going to be okay when it was in the air, but I was sweating the bounce. If it got a bad bounce, it easily could’ve gone in the water,” Hardy said. “Saving that shot was huge. You have to finish that stuff off in the early rounds of the week if you want to put yourself in position Saturday and Sunday.”

A strong contingent of fans followed Hardy around The Glen Club. It was hardly a surprise given the fact Hardy played countless rounds at nearby Anetsberger Golf Course, a nine-hole par-3 course less than three miles from The Glen Club, throughout his childhood. Hardy is also very familiar with this week’s venue, having grown up five minutes from it; he played the course in multiple Illinois Open Championships as well.

Hardy starred at the University of Illinois, where he was a two-time All-American, the 2018 Big Ten Player of the Year, and a three-time All-Big Ten First Team selection. Hardy played alongside fellow Illinois alum Brian Campbell Thursday, and their gallery included Dylan Meyer, a former Fighting Illini teammate with status on the Forme Tour.

Young’s bogey-free 64 marked his fifth consecutive round in the 60s, and second consecutive tournament-opening 64. Prior to last week, Young had 16 starts on the Korn Ferry Tour and never led after any of the 48 rounds he played.

“That’s how I’ve been as a player through my career. When it starts feeling good, I feel like it just keeps going,” said Young, who played collegiately at Wake Forest. “I’m very comfortable. I’ve made a few little changes with the putter… being more comfortable and happier on the greens has changed how I’m looking at each day, and it’s bleeding all the way through the bag.”

Once the showers rolled in, Young began his scoring run. After birdies at Nos. 5, 7, and 8, Young escaped wild drives at the ninth and 10th with a par and birdie, respectively. An 83-yard hole-out eagle at the par-4 13th took Young to 6-under, and an easy up and down for birdie at the par-5 18th, where he hit a 5-wood pin high and just left of the green from 258 yards out, capped the 7-under round.

“Frankly, one of the best rounds I’ve ever played in my life. Crowned with a hole-out on the back nine, where I was just trying to hang on,” Young said. “I like days like this. I’ve had some good battles, especially in the last few months, through some weather. My caddie and I were joking, we kind of thrived on it. We’re just out there doing the best we can not to care it’s raining on us, that we’re miserable, and that it’s cold. We’re just smiling through it, and it helps when things are going well.”

Friday’s forecast currently calls for more rain and temperatures once again hovering around 50 degrees. Don’t expect that to faze Young, who welcomed the impending weather conditions.