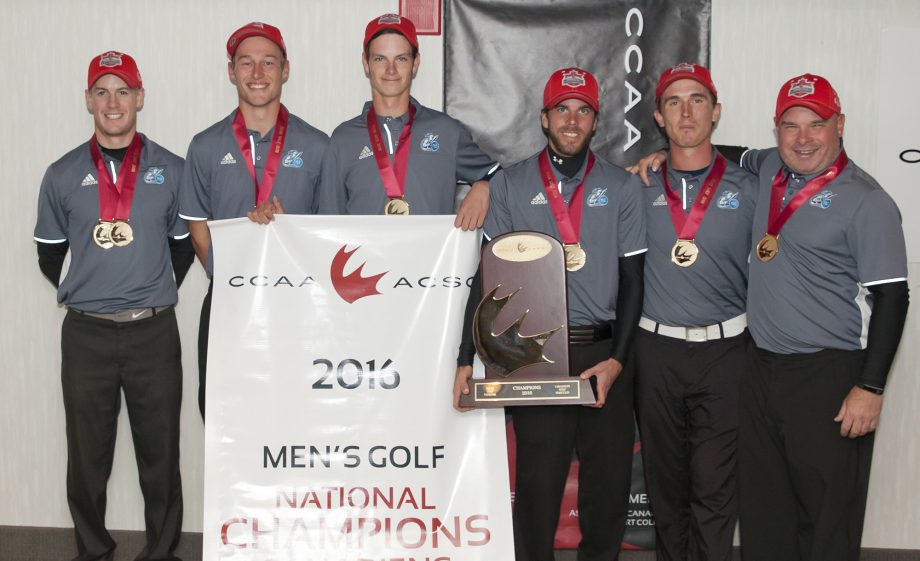 The final round of the CCAA Golf Championships at Fox Meadow Golf & Country Club began with a lot of excitement in the air. Players knew that the forecasted weather would provide a true test for the best collegiate players in Canada. High winds, cold temperatures and heavy rain gave the participants everything they could handle during the championships final day.

Josiah Dixon of the Niagara, Conner Watt of Humber and Marc-Olivier Plasse of Cégep André-Laurendeau battled all day in the tournament’s final group. Watt entered the 18th hole with a one-stroke lead over Dixon. However Dixon got into to trouble and finished with a triple bogey while Plasse closed with a par, leaving the two tied at 5-under par. Watt ended with a bogey and was presumed to be the individual winner by a three shot margin over the other two.

During the closing ceremonies it was brought forward by the rules officials that Watt had signed for a six on his scorecard instead of a seven. Watt was then disqualified and the green was cleared for Marc-Olivier Plasse and Josiah Dixon to compete in a playoff for individual gold. With darkness falling quickly, the pair matched each other shot for shot before Dixon finally clinched the event on the third playoff hole.

In team play the women’s golfers from the Georgian College Grizzlies and the men from the Niagara College Knights survived the elements on their way to become the PING CCAA National Golf Champions.

The women from the Georgian College Grizzlies led wire-to-wire, clinching the championship on Friday by posting a team score of 161. They defeated the Humber College Hawks by 14 strokes.

Cégep Champlain St. Lawrence Lions (+53), University of the Fraser Valley Cascades (+55) and the Medicine Hat College Rattlers (+59) rounded out the top five in the championship.

Individually Wallwin of the Georgian College Grizzlies won the women’s title by three strokes over Noémie Oullette of the Cégep Champlain St. Lawrence Lions after a final round 78.

For the host-team from Holland College Karleigh McEwen led the way by finishing tied for 14th; she was joined by teammates Daria Leidenius finishing in 23rd and Jaylene Holmes-Tang ending the tournament in 26th. As a group the Hurricanes finished in seventh place overall.

The men’s championship was claimed by the Niagara College Knights who stormed to the top of the leaderboard by posting a final round team score of 297. They claimed the championship by one shot over the second place team from Cégep André-Laurendeau Boomerang.

Rounding out the top five in the team competition was the University of New Brunswick Varsity Reds (+26), Cégep Champlain St. Lawrence Lions (+27) and the Humber College Hawks (+27).

The host men’s Hurricanes finished in a tie for seventh place after posting a score of 304 on Friday; they were represented by Tyson Gavin (T10), Connor Shea (T20), Bradley Jenkins (41st), Peter Frenette (T42) and Spencer Compton (T53).

The event featured several firsts for the championship. This was the first time that the results from the PING CCAA National Golf Championships were counted towards the World Amateur Golf Rankings.

This was also the first time that this Championship was broadcasted live which was a major success thanks to the hard work from all involved including TV1 presented by Bell Aliant and Universum Media.

For a full look at the official tournament photos by Mike Bernard Photography visit this link.

To watch archived footage of the events broadcast visit this link.

For a full look at the final championship leaderboard visit this link.