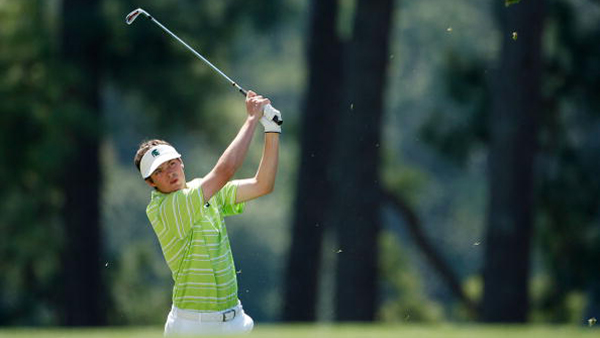 Vancouver, BC – Des Moines, Iowa’s Jack Newman shattered the course record at Point Grey Golf and Country Club on Saturday, carding an 11-under 61 to take a one stroke lead heading into the final round of the PC Financial Open, the kickoff event for PGA TOUR Canada’s second season.

Newman, the 2008 U.S. Amateur Public Links champion, carded birdie streaks of six and four in a row, totaling 11 on the day to lead by one over Chilliwack, British Columbia’s Brad Clapp heading into the final round. Two shots back in a tie for third were North Vancouver’s Eugene Wong, the 36-hole leader, and Clarkston, Washington’s Joel Dahmen.

“It’s kind of like being in the third person. I told [playing partner Clark Klaasen] out there, it’s crazy – just blacking out. It’s a rarity. It’d be nice to do it a little more often,” said Newman of his incredible round that moved him up 37 spots on the leaderboard.

“I didn’t even look at the scoreboards once today. I knew I was up there and I knew I was around the lead. We’re just going to keep the same mindset going in to tomorrow and hopefully have some fun,” said Newman.

Newman’s round looked to be taking a turn for the worse at the par-3 13th, when he flew his approach over the green and had a tricky downhill pitch to try and save par. But instead of a momentum-stalling bogey, the Michigan State grad turned the tables and holed the miraculous pitch for a birdie, his second of four consecutive birdies on the back nine from holes 12-15.

“That’s one of those ones where you’re going to make bogey 50 per cent of the time, so that kind of kept the round going,” said Newman, who topped his previous best round in competition, a 64 on the eGolf Tour. “If you don’t make that, your 61 turns into a 63 or 64 just because of the momentum it brings.”

CLAPP READY TO HANDLE SUNDAY’S PRESSURE
Through 54 holes at Point Grey, Chilliwack native and PGA TOUR Canada rookie Brad Clapp has managed well to deal with the pressure of playing in front of large galleries and being in contention, carding rounds of 67-69-67 to sit one shot back heading into Sunday. And while he admitted he’s certain to face nerves on Sunday, the 27-year old said he’ll be able to draw on how well he handled the most pressure-packed situation of his career less than a month ago at the British Columbia Qualifying Tournament at Crown Isle Resort and Golf Community.

That’s where Clapp played his way into a six-for-one playoff for exempt status, and carded birdies on two of the three playoff holes to lock up his spot on TOUR for 2014.

“That was basically playing for my season. I know a good conditional card is fine, but that was with my whole season and my whole career on the line,” said Clapp, the 2012 PGA of BC Champion taking his first full run as a TOUR player. “I don’t know if there will be more pressure than that playoff. We’ll see tomorrow.”

“I’m really happy with how I’ve handled the crowds and pressure with all that stuff,” said Clapp. “I can gain a lot of confidence from what I’ve done previously in tournaments past.”

WONG UPBEAT FOR FINAL ROUND CHANCES
North Vancouver’s Eugene Wong struggled to reproduce the magic that earned him the outright lead through 36 holes on Saturday, but the 23-year old was upbeat about his chances to try and win heading into Sunday’s final round.

“I like this spot because I feel like I have to chase the leaders, and I like that because I can be a lot more aggressive,” said Wong, a two-time winner on PGA TOUR Canada. “That’s my style. I’m a very aggressive player when I need to turn it on.”

Wong’s up-and-down day included a double bogey on the par-3 second and back-to-back bogeys on 13 and 14, but the former Jack Nicklaus Award winner at the University of Oregon rebounded with birdies on 16 and 18 to finish with a 1-under 71 on the day, two back of the lead heading into Sunday’s final round.

“I grinded it out, especially after those back-to-back bogeys,” said Wong. “[The birdies on 16 and 18] were pretty significant, because now I’m only two shots back. So I’m in the hunt to win.”