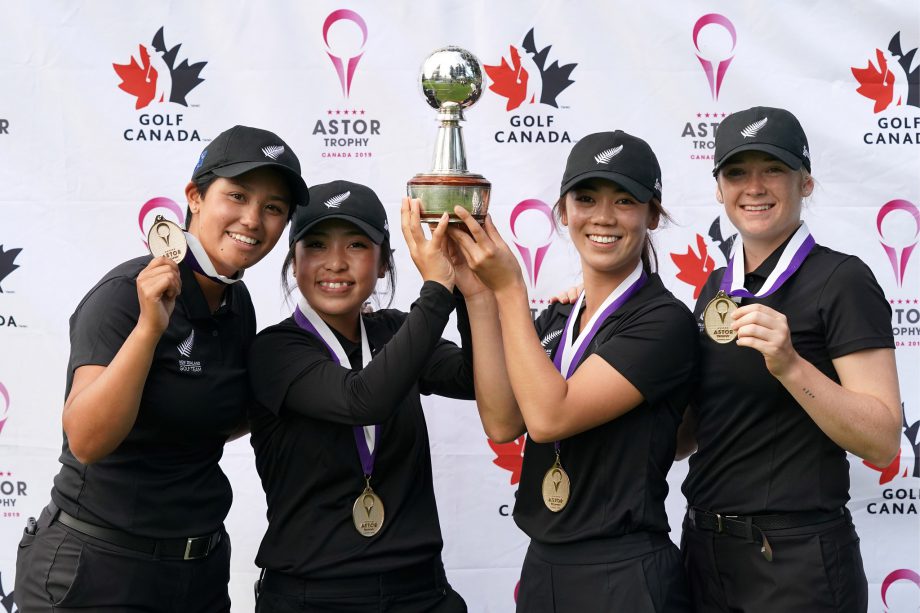 The Astor Trophy, a five-country competition which has been played every four years since 1959, had never been won by New Zealand. Until now.

And the fact New Zealand earned it with a victory Sunday over Australia made it that much sweeter. This was a little like the All Blacks beating the Wallabies in rugby, albeit on a smaller scale, but in a much more civilized setting.

The New Zealand team of Julianne Alvarez, Amelia Garvey, Wenyung Keh and Carmen Lim played splendidly all week and clinched the Astor Trophy with a 3-1 victory in their winner-take-all singles matches Sunday.

“You don’t get many events like this and to win one for your country is special,” Garvey said. “New Zealand doesn’t usually win many, so I am really stoked.

“It was especially sweet to beat Australia. We were all laughing that it was coming down to New Zealand and Aussie on the last day in the last group. It is always a good battle between us.”

Garvey helped clinch the match with a dramatic  comeback. She won her last three holes to win her match against Australian Kirsty Hodgkins on the 18th green.

At about the same time, Keh was clinching her match 2&1 over Stacey White. The trophy was theirs as New Zealand only needed to win two of the four singles matches to clinch the competition.

Garvey came racing down the 18th fairway, leaping in the air and screaming, to congratulate Keh on the 17th green.

New Zealand finished the five-country competition with 3.5 points. Australia, South Africa and Great Britain & Ireland all had two points, while Canada finished with a half-point.

Sunday’s final match was a winner-take-all affair. Only New Zealand and Australia had a chance to win the Astor Trophy on the final day.

After the two countries split their two morning foursomes matches, it came down the four singles matches. Australia needed to win three of them to take the trophy.

For a while it looked like they might do it. But Garvey’s comeback tilted the match in New Zealand’s favour. Shortly after Keh clinched her match, Alvarez won her match 3&1.

Keh was New Zealand’s top player. She didn’t lose a match all week and combined with Alvarez, her former University of Washington teammate, to win all four of their foursomes matches.

Keh played brilliantly all day Sunday and hit what looked like an impossible 5-iron out of trees and onto the 17th green to put the finishing touches on her match.

“Yeah, I was pretty solid,” she said with a smile. “I didn’t take any shots for granted today. I knew we had to play solidly against Australia because you knew they were going to come out fighting. I am glad we won in the end, because we lost to them last time.”

It is played every four years and during the five-day competition each four-woman team played one another once.

Carter was proud of the way his players played and the spirit they displayed during the competition.

“Winning is always the goal, but at the start of the week we talked about how the things we wanted to be known for were having fun, having courage, showing kindness and having integrity,” Carter said. “And I’d like to think we have nailed that.”

The Canadian team of Noémie Paré of Victoriaville, Que, Mary Parsons of Delta, B.C., Brooke Rivers of Brampton, Ont., and Emily Zhu of Richmond Hill, Ont. closed the competition with a match against Great Britain & Ireland. They dropped the match 4-2, but got big singles victories from Rivers and Paré. Rivers knocked off Olivia Mehaffey 2&1 and Paré beat Alice Hewson 6&5. Both Mehaffey and Hewson are ranked inside the top 20 on the World Amateur Golf Ranking.

Paré, who is heading into her senior year at Barry University in south Florida, said she’ll never forget her Astor Trophy experience.

“I didn’t know what to expect,” Paré said. “I wasn’t familiar with Golf Canada and I have been a little starry-eyed this week. I have just tried to take everything in and I have been so happy with the experience.”

The next Astor Trophy will be held in New Zealand in 2023.