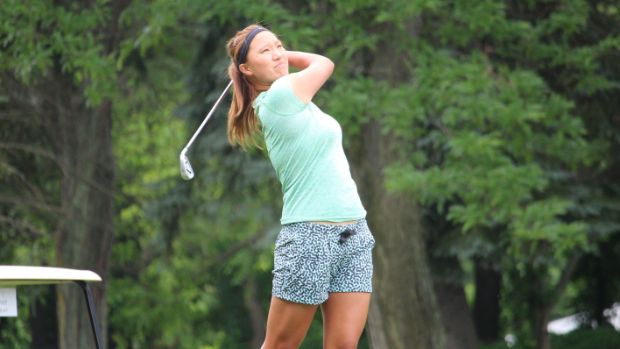 Annie Park during the second round of the Toyota Danielle Downey Classic in Rochester, New York. (Symetra Tour)

ROCHESTER, N.Y. – Annie Park of Levittown, New York was playing in the NCAA Women’s Golf Championships a month and a half ago. Now, she has the 36-hole lead at her fourth event ever as a professional golfer. She posted a 5-under 67, tied for the low round of the day, to vault to 9-under 135. Emily Talley (Napa, Calif.) and Giulia Molinaro (Treviso, Italy) are in a tie for second at 6-under 138.

“I just turned professional a month ago so this is all happening so fast,” said Park, who was surrounded by her first media scrum as a professional. “The transition was really quick, after Nationals I had the Open qualifier and then a week later I had my first professional event so I didn’t really have time to breathe.”

Her 11th round as a professional turned out to be her best so far.

“I was hitting it better than yesterday so that was an improvement,” said soft-spoken Park. “My putting wasn’t as hot as it was yesterday, but just being able to hit fairways and greens was nice.”

The 2013 NCAA individual champion at the University of Southern California made the turn at 1-under for the day. She kicked it into high gear with four birdies on the back nine including a 20-footer on 16.

“I was struggling with some shorter putts and that putt made me feel a lot better about myself,” said the 20-year-old Park. “My putting got better as the round went along and I’m happy that I was bogey-free.”

Since turning professional, Park has two top 20 finishes in three events including a tie for 13th two weeks ago at the Tullymore Classic.

In addition to pursing an LPGA Tour card this year, she is also going to continue her communications degree at USC starting this fall when she’ll take classes between Symetra Tour events.

“I’ll be headed into my senior year and I’ll have a year and a half left and I’d rather finish now than later,” said Park. “I’m planning on taking less classes each semester and I’ll talk to my professors and see how that works out.”

Park’s mom, who got her into golf, has been her travel companion and caddie in her rookie season on Tour.

“My mom has been my caddie basically my entire career so she knows me well on the course and I know her well,” said Park. “We work pretty well together. She got me started as a kid on the driving range when she said ‘I think you should play golf’ and I just said ‘OK’.”

Park earned Symetra Tour status by getting through stage one and two at 2014 LPGA Qualifying Tournament.

She is 93rd on the Volvik Race for the Card money list since she has only played in three events. A first place pay check of $22,500 would do wonders for her position on the money list.

Canadian Natalie Gleadall currently sits T8 with a second-round 71. Sara-Maude Juneau and Natalie Wallace are T11. Brooke Henderson signs for round of 70 to sit T19 alongside Maude-Aimee Leblanc. Brittany Henderson and Nicole Vandermade are T44.