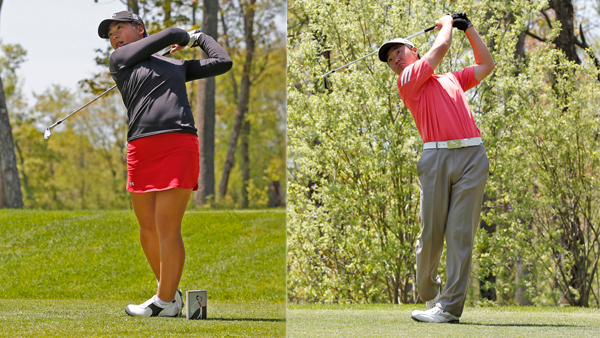 Minett, Ont. – The competition proved to be tough in the second CN Future Links championship of the 2014 season, CN Future Links Ontario. Team Canada Development Squad member Naomi Ko, 16, of Victoria, B.C. and Sun Kim, 16, of L’Ile-Perrot, Que. claimed their division titles at The Rock Golf Club in Minett, Ont. on Sunday.Ko claimed the Junior Girls title in a playoff after trailing runner-up finisher Selena Costabile, 15, of Thornhill, Ont. by one stroke over the course of the championship’s first two rounds. Ko finished the championship with a final score of 2-over-par 215 after rounds of 70-73-72. “I know that Selena is a great player so you never know what could happen in this kind of situation,” Ko said. “I think I had an advantage on the playoff hole because I was going for the green on two, so that was definitely a game changer. But they put some tough pin placements out there this week too.”Ko has proved to be an exceptional amateur competitor, claiming third in the CN Future Links Pacific Championship, as well as a top-10 finish on the Canadian Women’s Tour earlier this month. Grace St-Germain , 15, of Ottawa placed third in this weekend’s championship, followed by Team Canada Development Squad member Valérie Tanguay in fifth. In the Junior Boys division, Kim faced equally tough competition. A tie with Tyler Saunders of Sturgeon County, Alta. in Friday’s first round then led to a lead by Saunders in yesterday’s second round of play. Kim continued his strong play during the final round, scoring 1-under-par 70 for a final 212 total after rounds of 69-73-70. “Off the tee it’s very challenging on this course,” Kim said, “Once you miss the fairway it’s really tough to recover, but I just stuck to my game plan and I think I played really well.” Trent Abraham, 18, of Burlington, Trevor Ranton, 17, of Waterloo, Ont. and Bryce Evon, 18, of Windsor, Ont. shared second place at 3-over-par 216.  Saunders shared fifth with Tyler Nagano, 15, of Toronto.The top six competitors in the Junior Boys division of each of six regional CN Future Links Championship being held in 2014 earn exemptions into the 2014 Canadian Junior Boys Championship, which will be contested July 28 – August 1 at the Legends on the Niagara (Battlefield Course) in Niagara Falls, Ont. The Junior Girls champion from each 2014 CN Future Links Championship earns an exemption into the 2014 Canadian Junior Girls Championship which runs July 28 – August 1 at Thornhill Golf and Country Club in Thornhill, Ont. In addition, the Junior Girls champion receives an exemption into a 2014 Canadian Women’s Tour event.