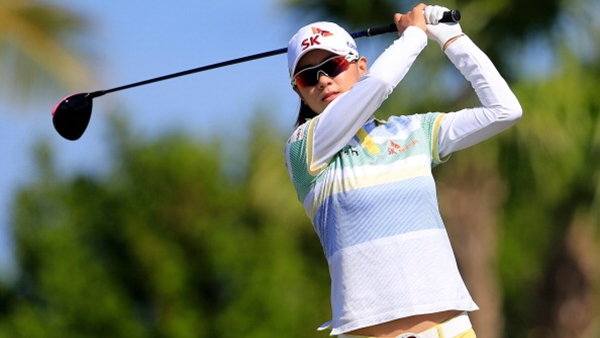 PARADISE ISLAND, Bahamas – Na Yeon Choi shot a 7-under 66 Saturday to take a one-stroke lead in the season-opening Bahamas LPGA Classic, chipping to a foot to set up a birdie on the par-5 18th hole.

The seventh-ranked Choi, a seven-time winner on the LPGA Tour, birdied three of the last four holes in her bogey-free round to reach 15 under on Atlantis Resort’s Ocean Club course.

“I think the last three rounds I had a really good swing,” Choi said. “I had so many good shots. But I still have to play aggressively tomorrow. So many players have a chance.”

Lizette Salas was a stroke back. She also had a bogey-free 66.

“I’ve been bogey-free for the last two days and I’m feeling great on the greens,” said Salas, winless on the tour. “A win is always on my mind, and it’s been a goal of mine since coming close last year in Hawaii.”

Jessica Korda and Paula Creamer each eagled the 18th to reach 12 under. Korda, the second-round leader, had a 72, and Creamer shot 71.

Michelle Wie and 16-year-old Lydia Ko were in the group at 10 under. Wie followed her second-round 65 with a 72. Ko, making her first start as an LPGA Tour member, had a 71.

Alena Sharp of Hamilton, Ont. shot a 70 Saturday and is tied for 25, while Toronto’s Rebecca Lee-Bentham posted a 76 to fall into a tie for 59th.