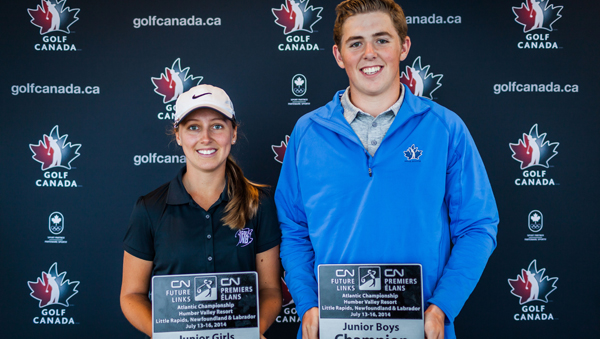 Little Rapids, N.L.  – The final CN Future Links event of the 2014 season wrapped up at Humber Valley Resort today, with champions being crowned after 36-holes of play due to the cancellation of the third round because of inclement weather.  Myles Creighton, 18, of Digby, N.S. and Rachel Cormier, 18, of Rothesay, N.B. earned the 2014 CN Future Links Atlantic champion titles in their respective divisions.

Creighton grabbed the lead in the Junior Boys division in Tuesday’s second round, shooting a 1-over 73 to lead by one stroke over the first round leader, 18-year-old Ian Lewis of Fall River, N.S.

“The toughest part for me was hitting it onto the green, because as soon as I’d swing the wind would grab the ball and really affect it,” said Creighton at the Wednesday afternoon award ceremony. “I would have liked to play all three days, but it’s a good feeling to win.”

Creighton finished the tournament with a final score of 4-over 148. Lewis and Tyler Erb, 17, of Toronto finished in a tie for second at 5-over 149 after two rounds of play. Blair Bursey of Gander, N.L. and Andrew Brown of Calgary, Alta., both 17, shot 6-over 150 to follow in a tie for fourth.

Cormier led the Junior Girls division since Monday’s opening round, shooting rounds of 79-80 to finish the championship with a total score of 15-over 159.

“The wind, the bunkers, and the narrow fairways were all challenging this week,” Cormier said of the challenging Humber Valley River Course. “I didn’t pull out the driver a lot; I took irons off the tee sometimes just to keep the ball in play. I just wanted to play it safe instead of trying to go for it and ending up in trouble.”

Following Cormier in second was 15-year-old Laura Jones, of Berry Mills, N.B. Jones finished the championship with 172 for the championship, followed by Claire Konning, 16, of Indian Mountain, N.B. in third.