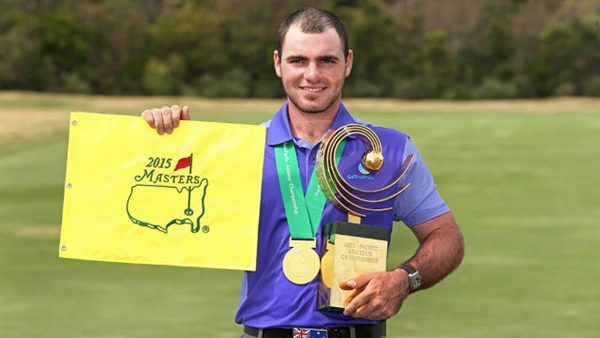 MELBOURNE, Australia – Antonio Murdaca of Australia earned a place in the field for next year’s Masters at Augusta after winning the Asia-Pacific Amateur Golf Championship by seven shots Sunday on Royal Melbourne’s composite course.

The 19-year-old Murdaca led by eight strokes overnight and shot a 1-under 71 Sunday to finish at 13-under 275, becoming the first Australian to win the title.

Japan’s Horikawa Mikumu had a 69 to break out of a tie with Australian Todd Sinnott and take second place.

“I was worried in the practice rounds whether my game would fit the course here,” Mikumu said. “But as I played through the weak I got a bit more adjusted to the course and I was able to figure out a little bit how to challenge the course.”

Murdaca and Mikumu will also be exempt until the final stage of qualifying for the 2015 British Open at St. Andrews.

“It’s a dream come true. I can’t wait,” Murdaca said. “I was standing on that second shot today sort of thinking `wow, imagine if I get to the Masters. Imagine how many people there are going to be’.”

Murdaca’s lead was cut to five shots when he shot 36 on the front nine, but he came home strongly with birdies on the 10th and 14th holes.

Sinnott finished with 71 to take third place ahead of 16-year-old Australian amateur champion Ryan Ruffels in fourth. China’s Dou Zecheng and Guan Tianlang, who won the 2012 tournament aged 14, and Taiwan’s Pan Cheng-tsung shared fifth at 2-under 286.

Murdaca dominated the later stages of the tournament. He trailed Sinnott by two shots after his opening round, led by one shot after the second – as the only player in the 116-strong field to break 70 in both of the first two rounds – then took charge of the tournament with his equal low score of 67 of Saturday.

“I had a little bit of a sleepless night I guess,” Murdaca said. “I woke up nice and early. I didn’t want to miss my alarm this morning. That could have been a disaster.”

Murdaca said he tried not to think about winning on Sunday and try and concentrate on playing as he had throughout the week.

“I think after I hit that second shot into 18, I got some goose bumps,” he said. “It is pretty special considering the reward you get at the end. I’ve been working hard all year, hunting for a win and I finally got one and I think I found the right event to win.”