Moving on at PGA Championship of Canada 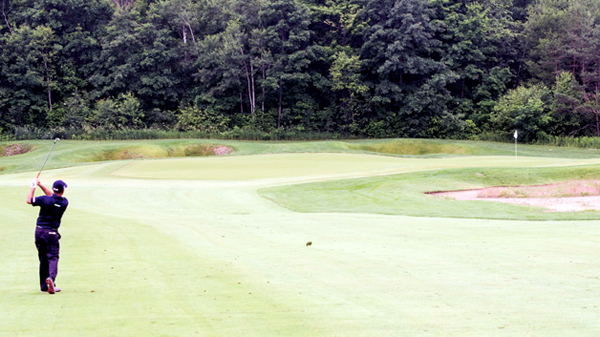 Photo by: PGA Championship of Canada.

UXBRIDGE, Ont. – A slew of the top seeds advanced Wednesday into to the round-of-16 at the PGA Championship of Canada sponsored by Mr. Lube and presented by TaylorMade-adidas golf.

Top-seeded Billy Walsh, No. 3 Dave Levesque, 2012 champion and No. 6 Eric Laporte, and the seventh-seeded Brian McCann all won their second round matches Wednesday at Wyndance Golf Club in Uxbridge, Ont.

As has been the case since the championship was re-launched in 2011, this year’s championship is contested as a match play event with players from the four brackets-Stan Leonard, George Knudson, Al Balding and Moe Norman-looking to advance through the five rounds to the final championship match.

Thursday morning’s third-round matches include Walsh vs. Godin; Peavoy vs. Maunder; Keating vs. Zibrik; Belair vs. Doig; Cacchione vs. Barber; McCann vs. Blais; Levesque vs. LeBouthillier; and Laporte vs. Hutton.

Those winning matches on Thursday morning at Wyndance will advance to the quarter-finals on Thursday afternoon.

Of the remaining players, six are from the Ontario and Quebec zones, while the Alberta, British Columbia, Manitoba and Ottawa Valley zones each have one player remaining.

With 60 PGA of Canada Player Ranking points awarded to the winner of this year’s championship, Walsh, Levesque and Laporte all have an opportunity to jump to the top of the rankings pile.

The player who sits atop the PGA of Canada Player Rankings presented by RBC at the conclusion of the PGA Championship of Canada earns an exemption into this year’s RBC Canadian Open at Royal Montreal Golf Club in L’Île-Bizard, Que.

The 2014 PGA Championship of Canada sponsored by Mr. Lube and presented by TaylorMade-adidas Golf takes place June 23-27 with the Mr. Lube Tournament for Life Pro-Am kicking things off on Monday, June 23.

The first PGA Championship of Canada was contested in 1912 at Mississaugua Golf & Country Club.