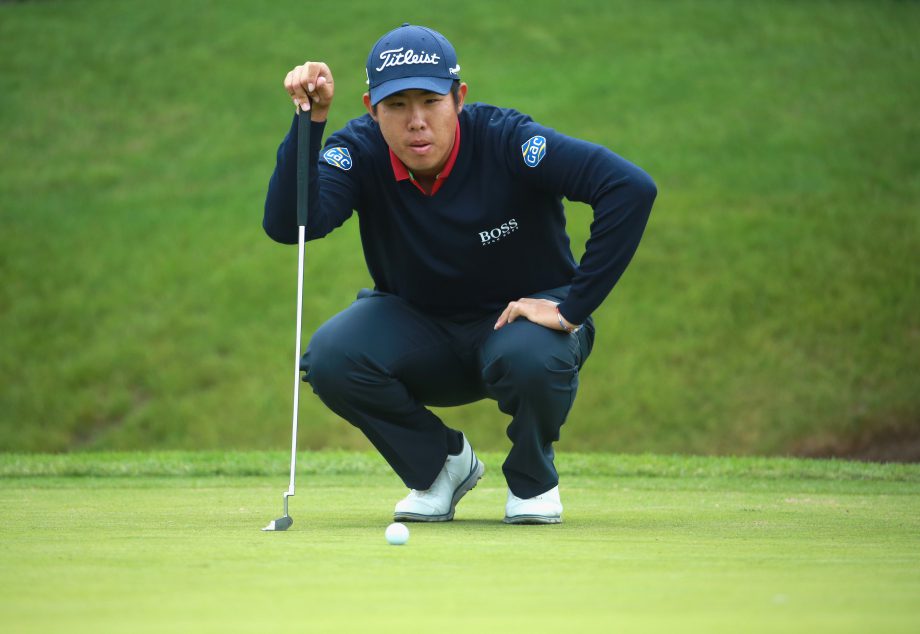 VIRGINIA WATER, England – Byeong Hun An shot a 5-under 67 Saturday to share the lead with Francesco Molinari after the third round of the BMW PGA Championship at Wentworth.

The South Korean trailed by a shot at the midway stage but made seven birdies, including two in the last two holes, to equal the Italian’s overall score of 14-under 202 going into the final day.

Molinari, who has led from round one, shot a 68. Thongchai Jaidee of Thailand was two shots back in third after a 68, while Tommy Fleetwood and Miguel Angel Jimenez provided the highlights of the day as they also advanced up the leaderboard.

“It is not easy to lead the tournament from the first day even though it is the ideal position,” Molinari said. “You’ve got guys coming for you. Today, you could hear the roars for eagles and an albatross.”

The roars Molinari heard were mainly for Fleetwood and Jimenez, who galvanized the crowd at the European Tour’s flagship event.

It was the Spaniard’s third hole-in-one this season and his round of 68 took him to 10 under and into fifth place.

“I got the right club in my hand and it was a beautiful swing,” Jimenez said of his ace. “It is nice to see the leaderboard and not be too far away.”

Fleetwood made an albatross on the par-5 fourth hole, with a 7-iron from 198 yards.

The Englishman followed it up with an eagle from 15 feet on No. 12 and went on to card a 65 to rise into fourth.

“That was about as good as you can play a hole of golf,” Fleetwood said of his albatross. “Perfect drive, 198 yards to the pin. I was thinking one (club) less but went with a normal 7-iron and it pitched seven or eight feet right of the pin and span in.”

The 23-year-old An is competing in his first full season on the European Tour after playing on the second-tier Challenge Tour for three years.

“It was really consistent all day,” An said. “I started with a birdie and it is good I am a co-leader. But I am going to play my game and not look at the position I am in when I try and play my shots tomorrow.”

Top-ranked Rory McIlroy missed the cut after a 78 on Friday.