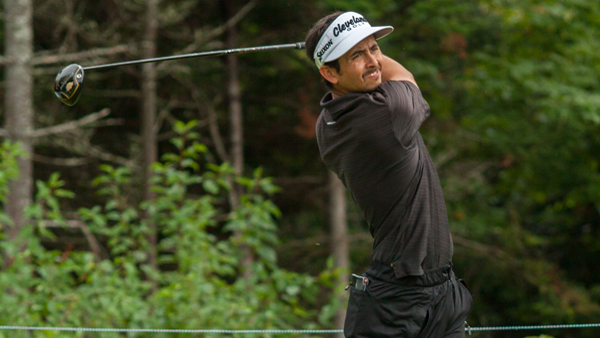 (Bath, ON) – Los Angeles, California’s Micah Burke shot a 10-under 62 on Friday at Loyalist Golf and Country Club to set the new competitive course record and take a one shot lead midway through the second round at The Great Waterway Classic. Burke led by two over Comox, British Columbia’s Riley Wheeldon as play was suspended due to darkness.

The 28-year old Burke chipped in twice and carded six birdies along with two eagles on the day to reach 12-under par through 36 holes, following up his first round 2-under 70 with his best career round in 38 starts on PGA TOUR Canada.

“I was putting really well yesterday, but I didn’t hit the ball well,” said Burke. “Today, I hit the ball really well, so I gave myself a lot of chances. I got in a good rhythm there, the rhythm that we always try to get into where you’re not really thinking about your score.”

The second round of The Great Waterway Classic was suspended due to darkness at 7:50 PM after delays due to inclement weather held up play for 6 hours and 45 minutes earlier in the day. Round two will resume at 7:30 AM on Saturday, with 107 players left to complete their second round.

Burke, who ranks 111th on the Order of Merit coming into this week, said he benefited from a swing tip after round one from playing partner and Order of Merit leader Joel Dahmen. The tip paid off on Friday, as Burke took advantage of the friendly scoring conditions with a solid ballstriking day.

“It helped a lot,” said Burke of Dahmen’s tip. “I wasn’t able to hit a lot of shots yesterday. Today I was able to move it both ways a little bit and control it a little better, and with soft greens like this, that helps a lot.”

Burke, who was battling flu-like symptoms over the first two days, finished his round nearly 12 hours after his original 7:20 AM tee time thanks to the lengthy weather delay, but said his swing kept him in rhythm despite the changing weather.

“I’m happy with it. The conditions were changing so much and you had to kind of adapt to each one,” Burke said. “It got really hot, and then it was raining, and then a little cold. When you’re in a rhythm like that it’s easier because you’re just hitting good shots and it’s easier to stay in the present.”

Wheeldon was two strokes back of Burke at 10-under, while Oklahoma’s Stephen Carney was one further behind at 9-under following a 4-under 68.

WHEELDON SET FOR STRONG FINISH
After playing between the Web.com Tour and PGA TOUR Canada this season, Riley Wheeldon said Friday he has his eyes on the prize for a strong finish north of the border.

The 23-year old, who has made nine starts on the Web.com Tour and five on PGA TOUR Canada, knows he’ll be playing in Canada the rest of the season after missing out on the Web.com Tour Finals, and said his goal is clear for the remainder of the year.

“It’s nice to know where I’m going to be each week and settles the travel down a little bit, and I can plan ahead,” said Wheeldon, who finished second on the PGA TOUR Canada Order of Merit in 2013. “It gives me a little bit more foresight going into these last four events. I have a clear goal and I know what I need to do now, so I need to finish strong.”

The former Big East Player of the Year at the University of Louisville said he’s trending in the right direction through two rounds at The Great Waterway Classic.

“I’m striking it as good as I have all year, which is a bonus,” said Wheeldon. “I’m staying out of trouble off the tee. The putter’s been a little cold, which is actually a good thing going into the weekend because it can improve. I’m happy with the way I’m hitting it and managing my game, and I should be in good position.”

Despite being in a different position than 2013 – he was the Order of Merit leader until the season’s penultimate event last year, and is 44th this year – Wheeldon said the familiarity of success on PGA TOUR Canada has him feeling good with four events to go.

“Any time you can win on any level,” said Wheeldon, “you have the confidence to do it again, so that’s the goal these last four events – to get one, if not two.”