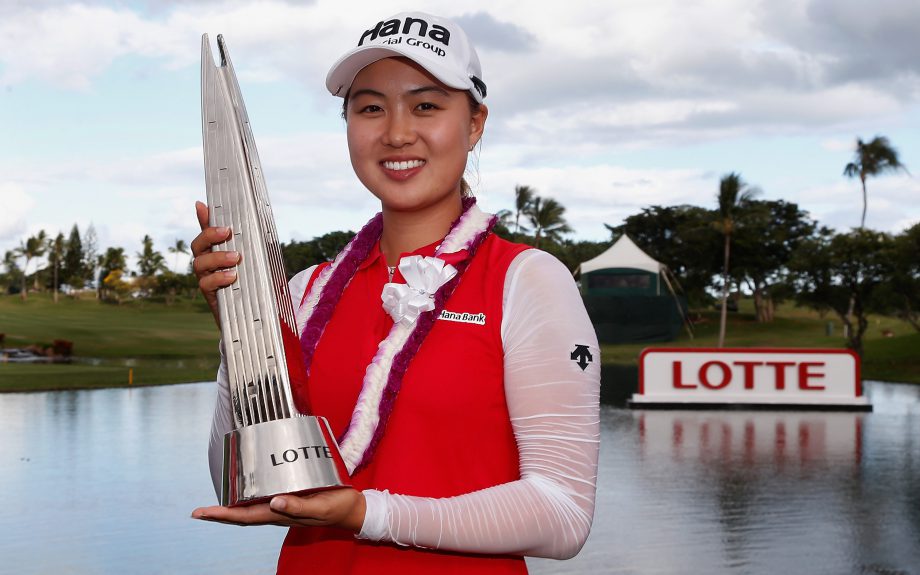 KAPOLEI, Hawaii – Minjee Lee won the Lotte Championship on Saturday for her second LPGA Tour title, closing with an 8-under 64 for a one-stroke victory.

The 19-year-old Australian played a seven-hole stretch in 6 under with a chip-in eagle on the par-5 13th and four birdies. She rebounded from a third-round 74 to finish at 16-under 272 at Ko Olina.

“Yesterday I spoke to my coach and he was like, ‘You’re only five back. Just shoot 8 under and you’ll be fine,'” Lee said. “And I shot 8 under, so that was good.”

Brooke Henderson of Smiths Falls, Ont., tied for 10th at 10 under to extend her top-10 streak to seven events. The 18-year-old closed with a 68.

“I think after I went eagle-birdie-birdie, I think the second birdie I was like, ‘Oh, I’m going to be really close,” said Lee, projected to move up 17th to 12th in the world ranking. “I just did all I could do, and here I am.”

She won the Kingsmill Championship last year in Virginia.

“Definitely a big confidence boost,” Lee said. “Last couple of weeks I was there, but not quite there. Now my game seems to be coming together really well.”

Burnett shot a 70. She lost the lead with a three-putt bogey on the par-3 16th, then missed a 6-foot birdie try on 17 and a long birdie putt on 18. The 26-year-old Georgia player, winless on the tour, led most of the day, going bogey-free for 40 holes before dropping a shot at No. 7.

“I don’t think I gave it away by any means,” Burnett said. “That’s something, last year I struggled in the final rounds, especially when I had been playing well. So, to have played well today was really good for me. … I don’t necessarily feel like I lost the tournament. I feel like Minjee just won it. Eight under, I mean, that’s pretty solid.”

“Very tricky on the green,” Chun said. “I try enjoy my game, so I’m still happy.”

She tied for second for the second straight event after sitting out a month because of a back injury. She was hurt when she was struck by a hard-case suitcase that rival South Korean player Ha Na Jang’s father dropped down an escalator at the Singapore airport.

Thailand’s Moriya Jutanugarn was fourth at 14 under after a 68.

Su-Yeon Jang was another stroke back after a 71. Playing on a sponsor exemption, the 21-year-old South Korean player was coming off a victory last week in the Korean LPGA event sponsored by Lotte.

Top-ranked Lydia Ko shot a 69 to tie for 23rd, her worst finish of the year, at 5 under. Ko won her last two starts in California and also has two seconds, a third and a tie for 15th this season. She will try to defend her title at the Swinging Skirts LPGA Classic next week in California.