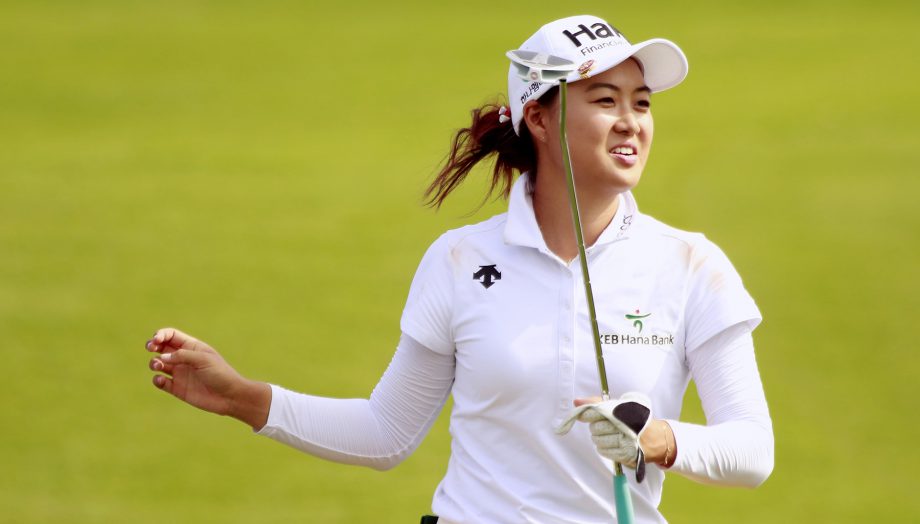 HAINAN, China (AP) — Minjee Lee birdied the final three holes for a 7-under 65 and a two-stroke lead Thursday in the Blue Bay LPGA, playing in perfect conditions two days after Typhoon Sarika hit the resort.

Lee hit a long flop shot to a foot from a difficult angle on the par-5 18th on Jian Lake’s Blue Bay course, back in top shape after a large cleanup effort. The 20-year-old Australian was delayed traveling from the event that ended Sunday in South Korea and finally got to the resort Wednesday, limiting her to nine holes of practice.

“Maybe it’s better,” Lee said. “I think it was pretty similar for a lot of the girls. I just took it as it is. It’s OK. … We have an amazing view from our hotel room and the course is in great condition. I think we’re really lucky to be here.”

“It’s in great shape and we had no wind,” Gal said. “There’s lot of tiers and little pockets on the greens, so you really got to know where to pitch it and you got to be sharp with your wedges and distances.”

Lee hit to 6 inches to set up a birdie on the par-5 14th. She has two LPGA Tour victories, winning last year in Kingsmill and in April in Hawaii.

“I just took it one shot at a time and didn’t get ahead of myself,” Lee said. “Just played my own game today and a lot of my putts dropped.”

Gal holed out from 89 yards for eagle on the par-4 second hole. She settled for par on 18 when her chip from light rough just off the green, hit the downslope, ticked the flagstick and ended up 12 feet away.

“I think we’re very lucky that the course is in such great shape and that we all got here safe and the typhoon didn’t do too much damage,” Gal said. “It’s all good.”

Spain’s Carlota Ciganda, coming off a playoff victory last week in Incheon for her first LPGA Tour title, was three strokes back at 68 along with South Korea’s Chella Choi.

“I thought it was better to rest,” Ciganda said. “I knew the course and my caddie just went and walked the course. Just hit some chips and putts to try to get the speed of the greens. No practice. Just go and play. I like it. Keep it simple.”

Canada’s Brooke Henderson birdied four of the last five to join Germany’s Caroline Masson and American Austin Ernst at 69. The 19-year-old Henderson is playing for the fourth straight week in Asia and plans to make it six in a row with stops in Malaysia and Japan.

South Korea’s Sei Young Kim, the winner last year in the wind without shooting a round in the 60s, opened with a 71. Second-ranked Ariya Jutanugarn also shot 71. The Thai star leads the tour with five victories.

Michelle Wie had a 72, playing alongside Gal and Na Yeon Choi. The slumping American got into the field on a sponsor exemption.

“Just going to play out the rest of the season and then I’m going to go back home to Hawaii, take some time off and try to regroup for next year,” Wie said.

Na Yeon Choi had two double bogeys in an 82. The South Korean player threw her ball in the water on 18 after missing a 12-foot eagle putt and tapping in for her lone birdie.