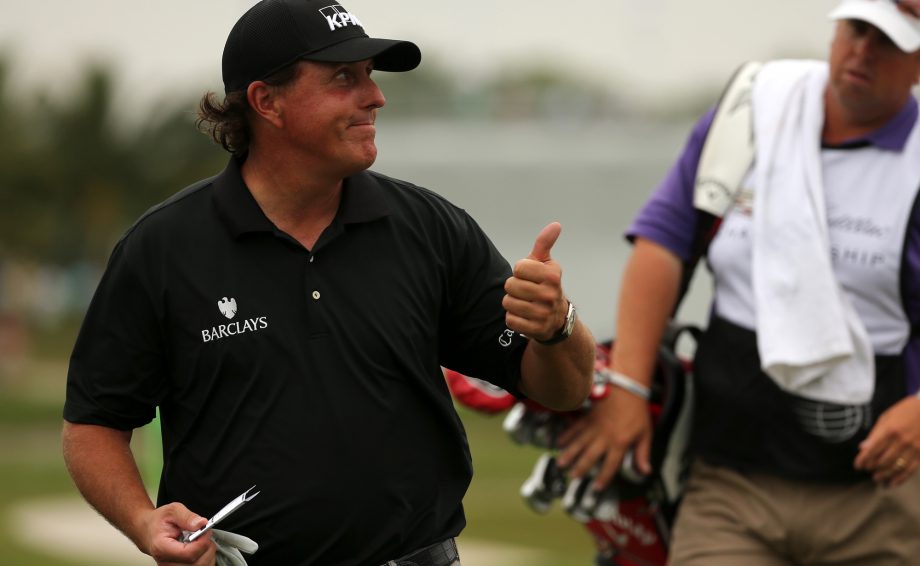 DORAL, Fla. – Phil Mickelson’s scores from Doral over the past two years clearly suggested that the redesigned Blue Monster wasn’t completely to his liking.

He had to re-learn a course that he played for more than 20 years, and indicated Thursday that he finally has the new Doral figured out.

Mickelson shot a 5-under 67 on Thursday in the opening round of the Cadillac Championship, the first World Golf Championships event of the year. Seeking his first win since the British Open in 2013, Mickelson made seven birdies and finished the day one shot back of leaders Scott Piercy and Marcus Fraser.

“There is a bit of a learning curve on some of the contours and where you have to go and where you want to go and the best place to be,” Mickelson said. “It’s not like I came in here weeks before and mapped it out like a major. You’re here only the week of. But this is our third year here now and it continues to get better each year.”

Fraser had seven birdies before his lone bogey of the day, and Piercy also got to 7 under at one point before settling for his 66.

Mickelson made bogey only twice, immediately erasing each with a birdie on the following hole, and the 67 was nearly six full shots better than his average round score at Doral in his previous two visits.

“It was a good day,” said Mickelson, who feigned disbelief when his chip on the par-5 8th – his 17th of the day – stopped inches from the hole, leaving him a tap-in birdie. “I hit a lot of good shots, made some good putts and just drove it well, enjoyed the day. It was a good day.”

Danny Willett, Adam Scott, Jason Dufner and Charley Hoffman were all two shots back of Piercy, each carding 68s. World No. 1 Jordan Spieth was in a group another shot back, three off the pace at 3 under, and said that even on a relatively calm day by Doral weather standards, it felt like a grind.

“It always is here,” Spieth said. “And this would be a day that should play about as easy as it possibly can with just a 5- to 10-mile-an-hour breeze. The standard wind here I think. Still, the scores aren’t extremely low.”

Spieth was in a featured group, with world No. 2 Jason Day and No. 3 Rory McIlroy with him. McIlroy shot 1 under, Day finished at even par.

“Human error, unfortunately,” Day said. “I wish I could hit it in the centre of the golf club all the time but sometimes I’m like an amateur and I hit it in the parts where we’re not supposed to. But that’s how it is.”

Piercy spent eight hours on the range Monday working on a change to his backswing and saw immediate results, making seven birdies in his first 11 holes. Being atop a World Golf Championships leaderboard on Sunday is far different than on a Thursday, but it’s a most positive sign for Piercy – a three-time winner on tour including the RBC Canadian Open – who shot better than 66 only once in his first 24 stroke-play rounds in WGC events.

“We all know we’re trying to beat those guys week-in, week-out,” Piercy said. “They have proved it. I haven’t proven it week-in, week-out, but when my game’s there I’m pretty decent. We all know they are there. They are looking at my name today. So maybe they will do it tomorrow.”

Past winners at Doral struggled a bit. Defending champion Dustin Johnson shot an even-par 72, putting him in a tie for 28th. And 2014 winner Patrick Reed could get nothing going, his 5-over 77 beating only three other players.

Mickelson won on the previous version of the Blue Monster, a course he knew as well as anyone. And Thursday showed he’s got a chance to do just fine on the redesign as well.