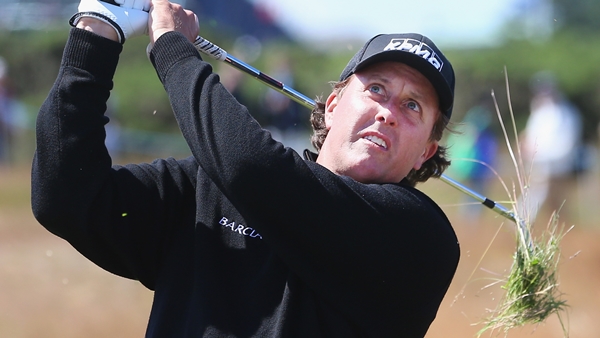 ABERDEEN, Scotland – From Darren Clarke in 2011 to Phil Mickelson in 2013, the last three winners of the British Open have honed their links-course game at the Scottish Open a week earlier.

So perhaps it’s no surprise that trend has lured many top players to the northern tip of Scotland, not just for a tilt at the $850,000 top prize but also for some practice of the type of shots that will be required at the year’s third major at Hoylake.

Mickelson is a Scottish Open regular who won the tournament last year before going on to capture the claret jug at Muirfield.

He will face competition this year from the likes of Rory McIlroy, Justin Rose, Luke Donald and fellow Americans Jimmy Walker and Rickie Fowler when the tournament gets underway at Royal Aberdeen on Thursday.

The Scottish Open has regained its luster after a couple of lean years with weak fields, which comes as no surprise to Mickelson.

“I think it’s a common-sense thing,” he said in an interview with Britain’s Daily Telegraph published Wednesday.

“To win the (Scottish Open) gave me a lot of momentum. It was such a big factor because it allowed me to work on the short shots around the green, in the firm conditions. My short game was very sharp in Open week – a lot of that was due to the week before.”

After three years at Castle Stuart in Inverness, the Scottish Open has relocated even further north to the par-71 Royal Aberdeen, founded in 1780. It’s the world’s sixth-oldest golf course.

Mickelson is a big fan of the old Scottish courses – and of Scotland in general. And he has learned to embrace the quirky challenges that characterize links golf, such as playing in fierce winds and dealing with the unpredictable bounce on undulating fairways, which is some feat given his Californian roots.

He mastered it in that stunning two-week stretch last summer, culminating in a 6-under 66 on the final day at Muirfield that allowed him to pip Lee Westwood for victory at a third different major.

“It requires a lot more precision and great flight of the ball, as well as control on the ground and touch around the green. It is just the complete test,” said Mickelson, who has yet to win a tournament in 2014.

McIlroy has had mixed success in Europe this season, winning the BMW PGA Championship at Wentworth – the European Tour’s flagship event – but then missing the cut at his home Irish Open a month later. He hasn’t played at the Scottish Open since 2009.

Rose, the 2013 U.S. Open winner, ended a yearlong title drought with a victory at the Quicken Loans National on the PGA Tour two weeks ago.

Former top-ranked Donald won the Scottish Open in 2011 and will partner with Mickelson in the first two rounds this year.

Nick Faldo, a six-time major winner, is also in the field. He will be playing his first regular European Tour event since 2010.