Mickelson, McIlroy to square off in opening session 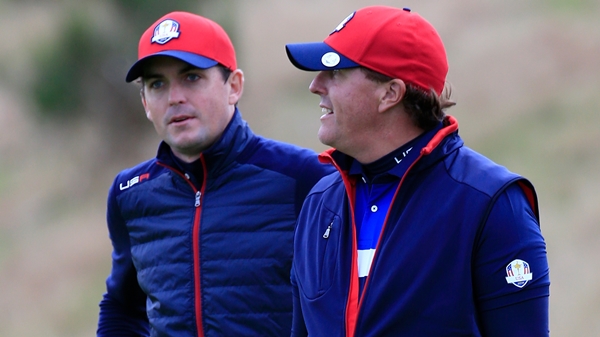 GLENEAGLES, Scotland — Two days after Phil Mickelson poked fun at Rory McIlroy, they face off in the Ryder Cup.

Mickelson and Keegan Bradley, undefeated as a team at Medinah, play the European powerhouse of McIlroy and Sergio Garcia in the opening session of fourballs on Friday at Gleneagles.

Mickelson took a playful jab at McIlroy when he said the best part of American unity is the players don’t “litigate against each other.” McIlroy has a court battle against his old management firm and the lawsuit now involves Graeme McDowell.

Webb Simpson and Bubba Watson will hit the opening shot in the better-ball format against Justin Rose and Henrik Stenson.

Pairings for the opening session of fourballs matches Friday at the Ryder Cup (all times EDT):