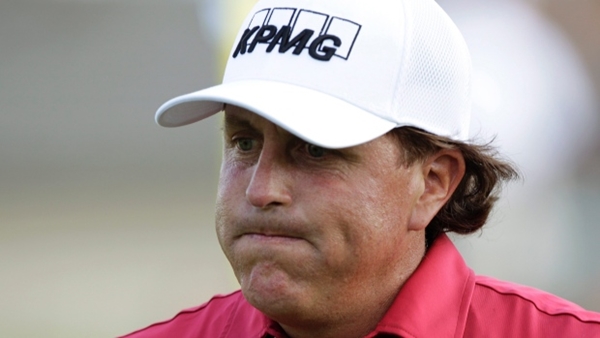 A federal official briefed on the investigation told The Associated Press the FBI and Securities and Exchange Commission are analyzing trades Mickelson and Las Vegas gambler Billy Walters made involving Clorox at the same time activist investor Carl Icahn was attempting to take over the company.

The official was unauthorized to speak about the ongoing investigation and spoke to the AP on condition of anonymity. Reports of the investigation appeared in several newspapers, including the Wall Street Journal.

Smiling as he stood before a room packed with reporters and cameras, Mickelson said the investigation had not been a distraction until FBI agents approached him after his opening round Thursday. He did not offer any other details, including his relationship with Walters or any stock advice he might have received.

He said it would not affect his preparations for the U.S. Open in two weeks, the only major he lacks for the career Grand Slam.

“It’s not going to change the way I carry myself,” Mickelson said after an even-par 72 at Muirfield Village left him far behind the leaders. “Honestly, I’ve done nothing wrong. I’m not going to walk around any other way.”

The federal official told the AP that Mickelson and Walters placed their trades about the same time in 2011. Federal investigators are looking into whether Icahn shared information of his takeover attempt of Clorox with Walters, and whether Walters passed that information to Mickelson.

The New York offices of the U.S. Attorney and the FBI declined to comment.

After a brief interview, Mickelson stepped outside and signed autographs for about 20 minutes, like it was any other day at a tournament. Fans were supportive as ever on the golf course, and Mickelson gave away so many golf balls to children and his caddie asked a tour official to retrieve more balls from his locker when they reached the turn.

He had released a statement early Saturday, and said that he wouldn’t release details.

“I can’t really go into much right now, but as I said in my statement, I have done absolutely nothing wrong,” Mickelson said. “And that’s why I’ve been fully co-operating with the FBI agents, and I’m happy to do in the future, too, until this gets resolved.”

He declined to answer questions about his relationship with Walters, who owns several golf courses. And when asked whether Walters advised him to invest in Clorox or Dean Foods, Mickelson matter-of-factly replied to a Wall Street Journal reporter, “You should know. You wrote the article.”

Icahn, 78, is one of Wall Street’s most successful corporate raiders, famous for buying stock in underperforming companies, pressuring them to reform and selling out for a fat profit. In recent years, his targets have included Apple Inc., eBay and Dell Inc. His efforts have made him one of America’s richest people: Forbes magazine puts his net worth at more than $20 billion, making him the 18th-wealthiest American.

In the 1980s, he pioneered so-called greenmail raids in which financiers threatened companies with hostile takeovers unless they were paid a premium to go away.

Walters is a legendary figure in sports betting circles, widely feared by sports book operators as one of the few people who can consistently win. He’s bet millions on Super Bowls alone, and told “60 Minutes” in a 2011 profile that he has never had a losing year. An early user of computer data, Walters was one of the few bettors whose opinion was so respected that he could move point spreads if it was known what side he was betting on.

Walters and a group of bettors dubbed The Computer Group were indicted in the mid-1980s for running what prosecutors said was a bookmaking operation, but were acquitted at trial. Walters was also indicted on money laundering charges in 1998 and had $2.8 million in cash confiscated from a safe deposit box, but the charges were later dismissed and the money returned.

Walters was also a high stakes gambler on the golf course, regularly playing celebrities or PGA Tour pros for cash. He told Golf Digest that he once lost a $2 million bet and once made a 40-foot putt worth $400,000. Walters teamed up with touring pro partner Fredrik Jacobson to win the AT&T Pebble Beach National Pro-Am by 10 strokes in 2008 while playing as an 11 handicap.

Mickelson, 43, was inducted into the World Golf Hall of Fame in 2011. He goes to the U.S. Open next month in North Carolina with a chance to become only the sixth golfer to capture all four major championships. He has not won since the British Open last summer in Scotland.

Mickelson has long had a reputation to gamble, though he has said he scaled back his habit after his son, Evan, was born in 2003 following a troublesome pregnancy. The most publicized payoff was when Mickelson and friends won $560,000 on a preseason bet (28-1 odds) that the Baltimore Ravens would win the 2001 Super Bowl.

On the golf course, he has a long history of playing money games during the practice rounds. He occasionally gets a group of players and caddies together for dinner and small wagering during the NBA and NHL playoffs, and prominent fights.

A year ago, Mickelson was criticized for public comments that tax increases in California kept him from being part of the San Diego Padres’ new ownership group and might cause him to leave his native state. He said his federal and state taxes amount to over 60 per cent.