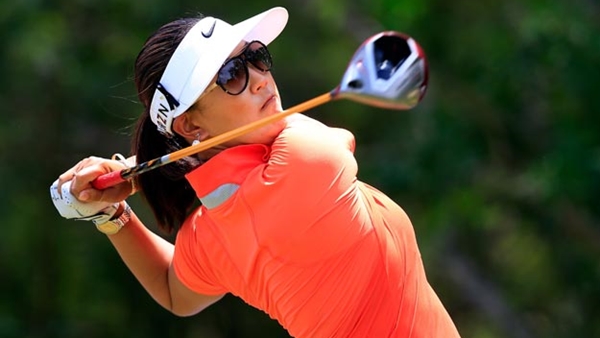 Improved sun protection and short game aside, Wie is riding high after a comeback win in her home state of Hawaii last week. Now, she returns to familiar ground in the Bay Area looking to build on her first LPGA Tour victory in nearly four years when she competes in the inaugural Swinging Skirts LPGA Classic – just up the freeway from her alma mater, Stanford.

After arriving in town early Monday, Wie took a power nap before visiting the university, where she “wanted to hug every single freshman I saw.” She enjoyed a tour of new athletic facilities and is determined to represent Stanford well in her first visit back to San Francisco since graduating in the spring of 2012.

“I really believe we are a bunch of nerds, but at the same time we’re kinda cool,” Wie cracked Tuesday, referring to Stanford’s Nerd Nation theme. “It’s awesome. I’m so proud I’m a Stanford grad.”

Wie is thankful for all the friends and family who cheered her in Hawaii, and appreciates those who will be here this week ready to root her on again. Even her fellow golfers were quick to offer hugs and congratulations to the former teen phenom who had become starved for a win.

Even her competitors say it’s hard to root against Wie, so well-respected and liked on and off the golf course.

“She’s a smart girl. There aren’t very many girls who have completed four solid years at Stanford while playing on the LPGA Tour,” world No. 2 Suzann Pettersen said. “That takes a huge effort. For her to finally be able to concentrate on golf full-time has helped her golf, for sure. If you ask me, Michelle has underachieved. She has every shot in the bag.”

Pettersen herself hopes for a rally of sorts at Lake Merced Golf Club this week.

This marks her first start since she was forced to pull out of last month’s Kia Classic with a back injury and missed the past three events, with a prescription of rest to let herself heal.

“I’m here, which is a good sign. I never would have been here if I wasn’t feeling good,” Pettersen said. “I love the Bay Area. It’s definitely one of my favorite spots in America after New York.”

Pettersen’s pants were muddy after players went through practice rounds on a cool, blustery day not far from the Pacific Ocean.

World No. 1 Inbee Park is thrilled to sample the city’s fine cuisine.

“I love seafood, so everywhere I go here I get to experience seafood,” she said, after already trying the famous clam chowder.

The 24-year-old Wie returns to the Bay Area along with the LPGA, which hasn’t hosted an event in the region since the 2010 CVS/pharmacy LPGA Challenge at Blackhawk Country Club in suburban Danville.

Organizers and club officials hope the tournament is here to stay at Lake Merced Golf Club, which takes the big stage starting Thursday in the $1.8 million event.

In Kapolei, Hawaii, on Oahu, Wie rallied to beat Angela Stanford by two strokes to capture the LPGA LOTTE Championship. It marked her first win since 2010 and first since graduating from Stanford.

Many players came from the windy conditions in Hawaii to more of the same.

“I have layers for every condition,” Pettersen said with a grin.

“I really feel like the Bay Area is my second hometown,” she said.