Michelle Wie healthy, confident and in contention in Phoenix 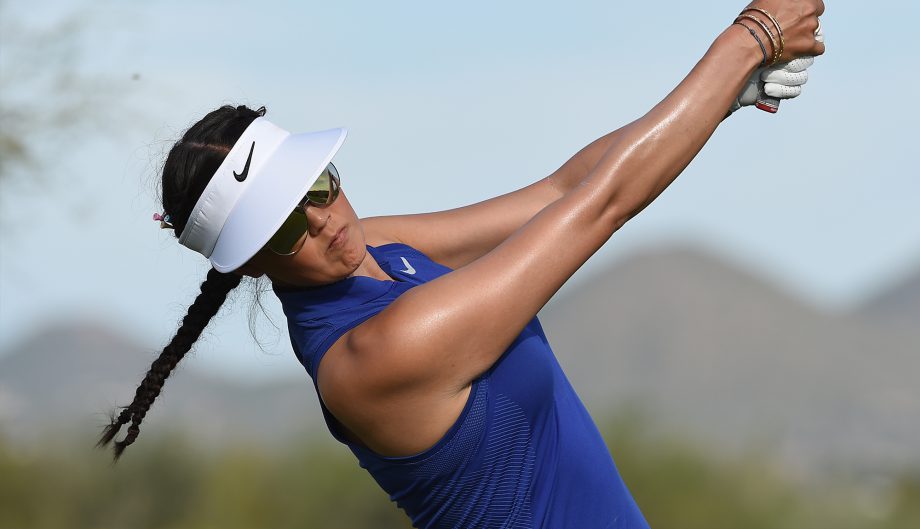 PHOENIX – Michelle Wie is healthy and confident again. She’s in contention in the Bank of Hope Founders Cup, too.–

Wie shot a 5-under 67 on Friday on another hot and low-scoring day at Desert Ridge to enter the weekend a stroke behind leaders Stacy Lewis and Ariya Jutanugarn.

“I think being in contention is definitely a spot where I feel comfortable at. Feels like home to me,” Wie said. “It’s nice being in this position again. I’m really proud of the way I’ve played the last two days.”

Lewis and Jutanugarn played together, each following an opening 64 with a 67 to reach 13 under in the tournament that broke the LPGA Tour record for the lowest 36-hole cut at 5 under. The previous mark of 4 under came in the 2015 Manulife LPGA Classic in Canada. The event record was 3 under last year.

“Sometimes birdies are pars out here,” Wie said. “Certain holes you have to make birdie to stay with the competition. It’s just kind of the nature of the game out here.”

Inbee Park (66) was another stroke back with In Gee Chun (69), Jessica Korda (66), Karine Icher (65), Chella Choi (66) and Sung Hyun Park (66). Finally over a left thumb injury, Inbee Park won in Singapore two weeks ago in her second start since winning the Rio Olympics.

Wie is winless in 62 events since the 2014 U.S. Women’s Open. She’s coming off a fourth-place tie in Singapore after struggling with injuries and her game.

Wie had six birdies in a nine-hole stretch, a run she capped with a 30-foot birdie putt on the par-4 ninth and a curling 8-footer on the par-4 10th. She bogeyed the par-4 13th after driving into the left rough and failing to get her approach to hold the green, and missed a 5-foot birdie try on the par-5 15th

Lewis is winless in 66 events since June 2014 and has slipped to 14th in the world. She won at Desert Ridge in 2013 to reach No. 1, was second in 2014 and 2015 and tied for fourth last year. After playing the first 11 holes Thursday in 9 under, she has fought to control her wedges in the thin, hot desert air.

“Didn’t have the distance control with my wedges quite dialed in the way I would’ve liked, but still made a bunch of birdies and shot a good round,” Lewis said. “It’s always hard to follow up a round like yesterday, so happy with the day.”

The 32-year-old Texan has played the Arnold Palmer-designed front nine at Wildfire in 10 under and the Nick Faldo-designed back nine in 3 under.

“Going into this weekend I’m going to be playing later,” Lewis said. “It’s going to be hotter, going to be this temperature. I just need to get that distance control dialed in because that is where you’re going to make birdies on this golf course, is with the wedges.”

The second-ranked Jutanugarn birdied four of the last six holes. Playing without a driver, the long-hitter is bogey-free after two days.

“I feel like every hole everybody have chance to make birdie,” Jutanugarn said. “I just try to play my own game and have fun. … I’m not really worry who going to be in the leaderboard. I just really wasn’t to focus on what is under my control.”

Nickamed “Lucky” and “Clover” because of her good fortune, Jang accomplished the feat on St. Patrick’s Day.

“I have the green glove today, so probably lucky,” said Jang, the Women’s Australian Open winner last month for her fourth tour title.

Juli Inkster followed her opening 65 with a 73 to make the cut by a stroke at 6 under. The 56-year-old U.S. Solheim Cup captain won a Legends Tour event two weeks ago at Sun City West.