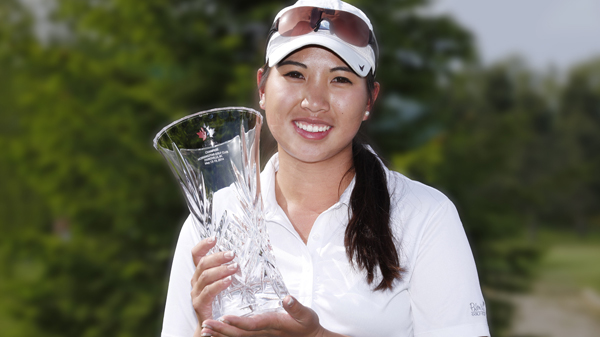 Tied at 1-over par 145 after 36 holes, Piyapattra of Corona, Calif., headed into a hole-by-hole playoff with Samantha Richdale of Kelowna, B.C., and Lauren Mielbrecht of Gulf Stream, Fla. The 21-year-old faced an almost identical shot from the middle of the 18th fairway that she had taken just minutes earlier on her first trip down the 400-yard par-4 before posting a 2-over 74.

After Mielbrecht missed her approach shot to the left of the green, Piyapattra stepped up and stuck a pitching wedge to 3-feet. Richdale followed and landed her second shot 25-feet away. Moments later Piyapattra watched both players miss their birdie attempts and confidently converted her short putt for the victory and exemption into the 2014 Canadian Pacific Women’s Open.

“It was amazing for my approach shot just to stay on the green because I’ve been having trouble with that all week,” Piyapattra said. “I was just trying to stay focused and make sure to think that it’s not over until it’s over. It was really a great feeling especially with such great competitors out here.”

Piyapattra’s final round 2-over 74 was highlighted by three birdies – the most critical coming at the par-4 16th hole to grab a share of the lead. The Columbia University Lion senior graduates next week and hopes to play as a professional at Canada’s National Women’s Open Championship at London Hunt and Country Club, August 18-24th, 2014.

“It’s really an honour and I’m obviously still an amateur since I’m still in school and graduating next week,” she said. “Hopefully by then I’ll have a professional status. It’s going to be great that it’s my first event and I got into it as an amateur, it’s a real honour.”

Richdale and Mielbrecht shared first-place prize money following their playoff losses. They both took home $8,498.18 for their second place finishes. Mielbrecht carded the low round of the day at Morningstar with a 1-under 71, while Richdale posted a 3-over 75.