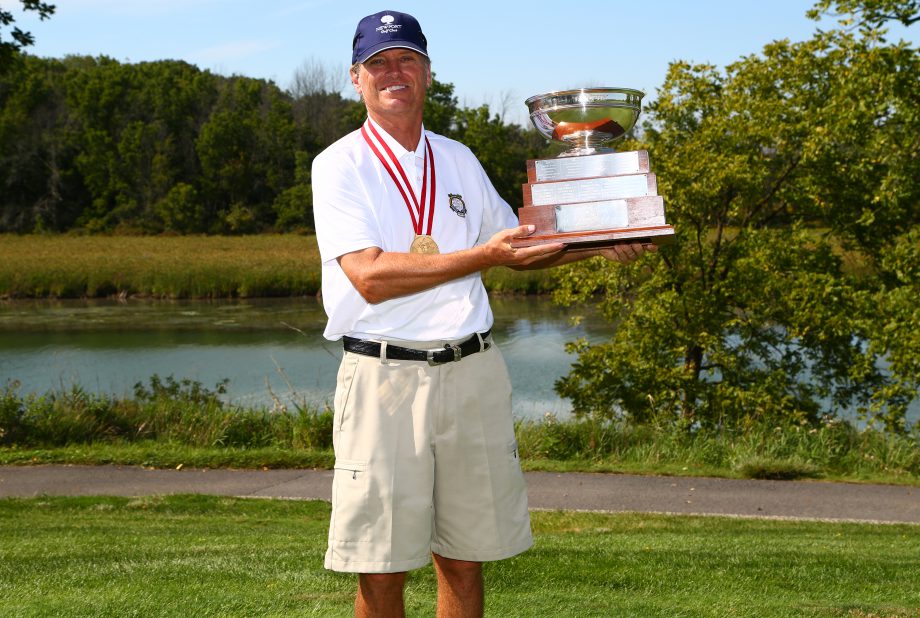 Mercier began the day with a share of first alongside Dave Schultz of Calgary, but a five-birdie, 2-under 70 propelled him to victory.

“Today, I didn’t quite strike the ball as well as I was striking it the first three days. The first three days, I hit the ball very well, only missed a few greens over a total of three days, but I struggled a little bit putting. Today, I didn’t hit it that well, but I kind of figured out my putter last night on the practice green. I got the stroke and it freed up a little today. I putted much better today and I hit it good enough to get by.”

The 58-year-old is the tournament’s 54th champion. With frequent visits to Canada and a number of ties to the country, Mercier spoke fondly of being its newest senior champion.

“It means a lot because Canada is somewhat dear to my heart since my great-grandfather came from here,” reflected the winner. “And apparently, I still have many cousins out there named Mercier up in the Montreal area that I’m related to. Because of that and the great spirit of the Canadian people, [my wife] Andrea and I, when we come up here every summer, it’s a real pleasure to come here. Because of that, Canada is more than just a stop for me to play golf in a great national championship, it’s like a second home to me.”

In addition to claiming the national senior title, Mercier has earned entry into the 2016 U.S. Senior Amateur championship to be contested from September 17-22 at Old Warson Country Club in St. Louis, Mo. Despite only learning of the exemption moments after his final putt, Mercier was buoyed by the victory and looks forward to the challenge ahead.

“When I’ve won in the past, I’ve gained some confidence,” explained Mercier. “I played okay earlier in the year, but in July and August, I hadn’t really played very well, so I started to lose some confidence. And then I could tell, my confidence started coming back during the second round because I started hitting some good shots and I was able to get up on some of the tougher holes and drive the ball a little more precise with confidence. I’m sure – I won’t know until next week when I go down to the U.S. Senior Amateur – but I know I’ll have more confidence than I came here with which will be a big help.”

Finishing in second-place was James Gallagher of Yorktown, Va. The 58-year-old collected four birdies, but fell shy of his goal by two strokes. Claiming shares of third at 2-under were Brady Exber of Las Vegas and Camrose, Alta., native Frank Van Dornick.

Van Dornick, Schultz and Brian Brown of Nanton, Alta., captured the inter-provincial team championship which was contested concurrently over the tournament’s two opening rounds. The trio claimed a nine-stroke victory over Team Manitoba.

Also played alongside the championship’s first 36-holes was the Super Senior division. John Gallacher of Burnaby, B.C., posted back-to-back 72s to secure a six-stroke victory in the 65-and-over competition.

The 2017 edition of the Canadian Men’s Senior Championship will be hosted at Kanawaki Golf Club in Montréal from September 11-14.