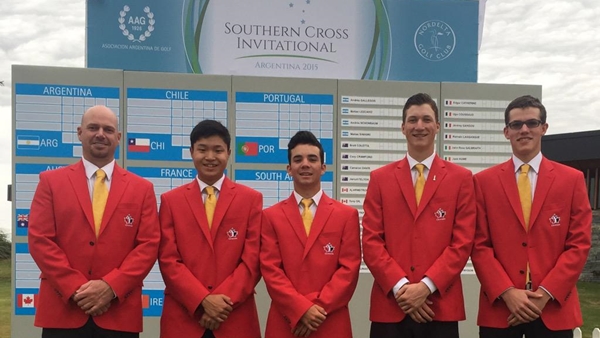 Team Canada is ramping up to send four Development Squad members to Argentina from Mar. 26–29 to compete in the Southern Cross Invitational.

The Canucks will square off against top international squads from Australia, Chile, France, Ireland, Portugal, South Africa and the host nation in the prestigious 54-hole event. Each country will play four players daily, with the top-three scores from each day being counted towards the team total.

“This will be the first big test for the guys competing as a new team against a strong amateur field,” said Lead Development Squad Coach, Robert Ratcliffe. “The boys have been working hard in the offseason and are excited to put their training to the test.”

Canada’s remaining two Development Squad members remain in action elsewhere around the world this week. Patrick Murphy, a native of Crossfield, Alta., is competing at a Pepsi Tour event this week in Litchfield Park, Ariz. and Tyler Saunders (Sturgeon County, Alta.) just finished wrapping up another collegiate event in his freshman season at Texas State University.

The inaugural Southern Cross began in 1999 between Argentina, Australia, New Zealand and South Africa. Since then, the event combined with the Four Nations and Ten Nations Cup to include the larger field it hosts today.

In similar fashion to the men, the Women’s Development Squad competed internationally overseas for the Astor Trophy earlier this year in Australia.