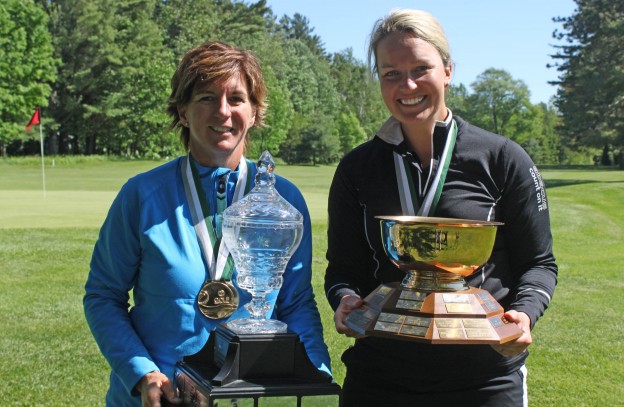 SUTTON WEST— Conditions were finally better for the remaining field at the Investors Group Ontario Women’s Senior and Mid-Amateur Championships, on June 9, as the final round concluded at The Briars Golf Club in Sutton West.

After the cut, following the second day, 62 players remained for the final round. For the championship, all senior aged players were eligible for both titles, while a field of 13 were exclusively competing for the Mid-Amateur.

Entering the day, Wasaga Beach’s Kristy McLaughlin, held a two-shot lead in the Mid-Amateur. The 30-year-old Mad River Golf Club member had put together a strong tournament finishing with rounds of two-over (74) and one-over (73). She would continue her steady play during the final round and went on to capture the title following a two-over (74) final round.

McLaughlin summed up her win after the round. “It feels great to win this. I have the Ontario Ladies Match Play Championship under my belt, but never had a win like this. I had a great day, I was striking the ball well, so it feels good.”

“I came into the day focused on playing steady. I just wanted to make pars. If a few birdies fell then great and if I made a bogey I would just make it up. I knew it was getting close at one point, so I knew I had to grind it out. I birdied 17 and that allowed me to get to 18 with a little more confidence,” added McLaughlin.

Finishing in second in the Mid-Amateur and winning the Investors Group Women’s Senior Amateur Championship was Thornhill’s Judith Kyrinis. Kyrinis, 52-years-old and a member of the Thornhill Golf & Country Club, came into the final round sitting third overall and second in the Senior Championship at seven-over.

Kyrinis was able to battle though some tough spots early and managed to get to the turn at just two-over.  She continued to be steady on the back nine and then hit back-to-back birdies on the 14th and 15th holes. That ended up being the clincher as she ended the day two-over (74), for a tournament total of nine-over (75-76-74-225).

The win was a long time coming for Kyrinis who talked about what it meant to her. “It feels fantastic, I am a little lost for words. I had a little trouble early with my drives, just not getting my legs going, and had a little bit of nerves. I knew what I was doing wrong, so I just tried to be patient and I got things going on the back nine.”

Kyrinis pointed to her back-to-back birdies on 14 and 15 as a real turning point for her during the round. “It really calmed me down. I made some good shots in there and when you feel like you are swinging well and the putts drop, it’s nice.”

Rounding out the top three in the Mid-Amateur Championship was a tie between Picton’s Casey Ward (Picton Golf & Country Club) and Newmarket’s Christine Ryckman. Ward (78-78-74-230) and Ryckman (80-74-76-230) each finished the tournament at 14-over.

There was a tie for silver in the Senior Championship between St. Thomas’ Mary Ann Hayward (71-78-83-232) and Uxbridge’s Gail Pimm (78-77-77-232). Thanks to their 16-over tournament total, Hayward (St. Thomas Golf & Country Club) and Pimm (Whitevale Golf Club) will join Kyrinis as the representatives for Ontario in the team competition at the Canadian Senior Women’s Championship, Aug. 24-26, at Wolf Creek Golf Resort in Ponoka, Alberta.

In addition to the overall champions, there were two other division champions crowned within the Senior Championship. Capturing the 60 and over division was Brockville’s Theresa deLuis, from the Brockville Country Club. She finished at 19-over (83-79-73-235) for the tournament to win the title. In the 70 and over division, it was Blue Mountain’s Maureen Burns who took the gold medal. Burns, from the Blue Mountain Golf & Country Club finished with a two-round total of 42-over (93-93-186).

The Senior Net Championship was won by London District at a total of 454. The team was made up of Hayward, Sue Postian (Sunningdale Golf Club), Jayne Hedges-McKinnon (Bear Creek Golf & Country Club) and Irini Perivolaris (London Hunt & Country Club).

The team from Scarboro District won both the Mid-Amateur Gross and Net division titles. The team, made up of Kathy Pilkey (Sleepy Hollow Golf Club) and Helen Williams (Station Creek Golf Club), finished with a 331 gross score and 305 net score.