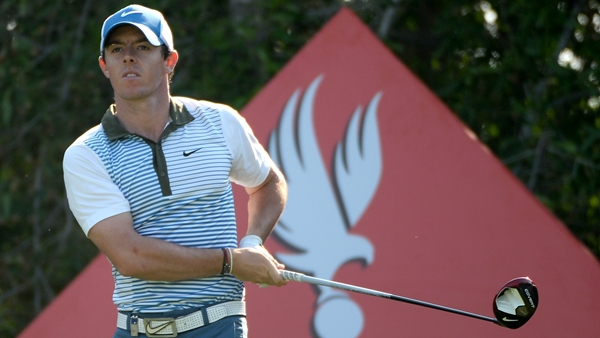 ABU DHABI, United Arab Emirates – Rory McIlroy birdied his last two holes to post a 5-under 67 and lie two shots off the lead two rounds into the Abu Dhabi Championship on Friday.

At 7 under overall in the European Tour event, McIlroy was rapt to be in contention for a second win in three tournaments. Playing partner Phil Mickelson was also happy, though in relief to make the cut by two shots at 1 under with a 70 after a first-round 73.

“I’m really glad I made the cut and I now have a chance over these next two days, because I kind of keyed in on something with my swing starting to feel much better,” Mickelson said. “I really need these two days to get my game in shape.”

Mickelson was impressed with McIlroy’s form.

“His game looks really sharp and his driving was impeccable,” Mickelson said of McIlroy.

Tied for the lead were Scotland’s Craig Lee (67) and Spain’s Rafa Cabrera-Bello (68) at 9 under, a stroke ahead of England’s Danny Willett (63), who eagled the par-5 8th hole at National Course beside seven birdies.

He was holding the end-of-2013 form that saw him come from behind and defeat Masters champion Adam Scott in the Australian Open in Sydney last month.

“It’s a great position to be in, as I’m only a few off the lead, so I’m excited,” McIlroy said.

He was happy to compare with how he missed the cut a year ago, when he debuted new equipment and left himself and sponsor Nike red-faced. In that humbling display of consecutive 75s were two double bogeys and seven bogeys.

“Coming off the last green last year, after 36 holes, I was deflated to say the least,” he said. “The week didn’t go as how I imagined it or how I planned. But it’s so much better this year. I’m happy with how I’m playing. I’m striking the ball really well. I got a few putts to drop on the back nine, which was nice. And yeah, I mean, I feel like if I can keep hitting it the way I have been, I’ve got a great chance to win in this tournament.”

While McIlroy won two tournaments ago in Sydney it has been 13 months since his last success on the European Tour when he birdied his closing five holes in winning the season-ending World Tour Championship in nearby Dubai.

Cabrera-Bello is also no stranger to winning in the Emirates, having captured the 2012 Dubai Desert Classic. The overnight leader dropped a shot at his last hole, the ninth, to fall into a tie with Lee, who seeks his first win on tour.

“I have been practicing hard the last two weeks and trying also to get back into shape, so I’m glad that is all paying off,” Cabrera-Bello said.