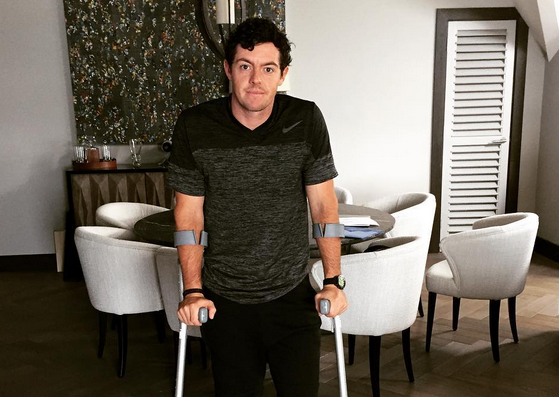 Rory McIlroy was on crutches Monday with an ankle injury from playing soccer, leaving in doubt the prospects of golf’s No. 1 player defending his British Open title next week at St. Andrews.

Just as excitement was building toward a potential clash at the Old Course between McIlroy and Jordan Spieth, McIlroy posted a jarring photo on Instagram showing him on crutches with a walking boot on this left ankle. The 26-year-old from Northern Ireland said it was a “total rupture” of an ankle ligament and the joint capsule that happened while he was playing soccer with friends.

Sean O’Flaherty, his chief spokesman, said McIlroy has withdrawn from the Scottish Open this week at Gullane. O’Flaherty said they would not know until later in the week the extent of the injury and whether McIlroy would be able to tee it up July 16 at St. Andrews.

Ben Hogan in 1954 was the last British Open champion who did not play the following year.

McIlroy had been the joint favorite along with Spieth. They have won the last four majors – the first time in nearly a century that two players in their 20s have shared four successive majors – and Spieth is headed to St. Andrews as only the fourth player with a chance at the Grand Slam.

Players were shocked to hear the news.

“Unlucky, obviously,” Luke Donald said in a telephone interview. “I would never say, `Don’t play football or don’t do these thing.’ You don’t want to live in a bubble. It’s just unlucky timing, especially this time of the year. Golf is exciting with Rory and Jordan. It’s added a bit of spice to the game. It’s a shame if Rory were to miss the Open, which it looks like he might.”

Sergio Garcia, a runner-up to McIlroy at Royal Liverpool last year, tweeted, “So sad to hear about (at)Rory McIlroy injury on his ankle. We will all miss you (at)TheOpen next week my friend. Fast and healthy recovery.”

McIlroy referred to his ATFL, which is the anterior talofibular ligament and the one most commonly sprained. The left ankle is crucial in a golf swing as weight transfers to that side of the body (for right-handers) in generating power.

“That’s a big blow to the Open if he misses it,” former Ryder Cup captain Sam Torrance said from Wimbledon.

McIlroy won the Open last year at Royal Liverpool by going wire-to-wire and taking a six-shot lead into the final round. He also won the PGA Championship, joining Jack Nicklaus, Tiger Woods and Bobby Jones as the only players in the last century with four majors at age 25 or younger.

The injury brought to mind Woods winning the 2008 U.S. Open at Torrey Pines with a stress fracture and shredded knee ligaments in his left leg. Woods knew about the injury a month before the U.S. Open and was determined to play, mainly because he was a six-time PGA Tour at Torrey Pines.

No one saw this injury to McIlroy coming, however. Along with potentially missing the British Open, McIlroy faces a busy time of the year as defending champion of the World Golf Championship at Firestone and the PGA Championship, followed by the FedEx Cup in America and the Race to Dubai in Europe.

Shane Lowry of Ireland told the Irish Times that he heard about the injury on Saturday.

“It’s not ideal for him because he’s wearing that boot and he’s going to have everyone in the media on his back now,” Lowry said. “But should he be playing football? I don’t know. He likes playing football, and he likes playing football with his mates. What’s wrong with that? … People think because you’re good at something you should just do that and focus on that, but that’s not what life is about.”

McIlroy has an affinity with the Old Course. It’s where he secured his European Tour card in 2007 as an 18-year-old at the Dunhill Links with a third-place finish. He also tied the major championship record of 63 when the British Open was held at St. Andrews in 2010, though McIlroy followed with an 80 in the wind. He tied for third at St. Andrews five years ago.