McIlroy roars back to share 5 way lead at French Open 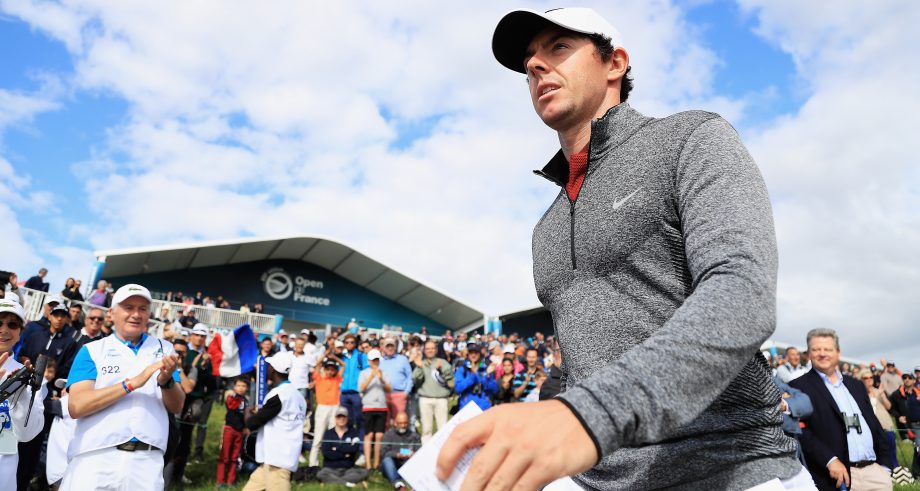 SAINT-QUENTIN-EN-YVELINES, France – Four-time major winner Rory McIlroy roared back into contention at the French Open on Friday, sinking six birdies in a 5-under round of 66 to join a five-way share of the lead.

The Northern Irishman could have taken the overall lead at the Le Golf National course – which is hosting the 2018 Ryder Cup – but a poor tee shot on the 18th hole led to a bogey.

South Korea’s Wang Jeung-hun matched McIlroy’s 66, while Thongchai Jaidee of Thailand – who was one stroke behind overnight leader Lucas Bjerregaard of Denmark – posted a 1-under 70 for a share of the lead. The other co-leaders, Mikko Ilonen of Finland and South African Brandon Stone, had 68s.

Bjerregaard is three shots behind after four bogeys in a 74.

“I played well. I kept the ball in play, I drove it well, hit fairways, hit a lot of greens. That’s sort of what you need to do around this golf course,” McIlroy said.

“I felt like I putted nicely. There were still a couple of putts that didn’t quite drop but it felt good out there. I need two more days like that over the weekend to have a chance.”

McIlroy was five shots off the lead overnight after an opening round where he struggled with his swing.

“In a way it’s nice to go into contention and not really be thinking about the result,” said McIlroy, currently in the spotlight because of his decision to miss the Olympics over concerns about the Zika virus.

He is using the tournament as a warmup for the British Open, starts July 14 at Royal Troon in western Scotland.

McIlroy announced in April that he was skipping the Bridgestone Invitational to instead play at the French Open for the first time since 2010.

While the five-man leading group has 28 European Tour wins between them, the chasing pack is strong.

Defending champion Bernd Wiesberger of Austria was at four under alongside Nicolas Colsaerts and Anders Hansen, with Joost Luiten, Francesco Molinari, Thomas Pieters and Andy Sullivan a further shot back.

Wiesberger had five birdies in his first eight holes but his momentum was ended by a triple-bogey and a bogey-bogey finish.

There are four qualifying places for the British Open up for grabs They will go to the leading four players, not otherwise exempt, who finish in the top 12 and ties.