McIlroy ready to get back to work 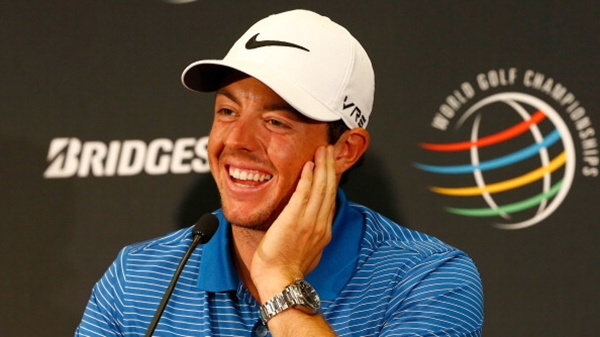 AKRON, Ohio – The Claret Jug is not out of sight. Rory McIlroy is just trying to get it out of his mind.

McIlroy had plenty of fun with golf’s oldest trophy after his wire-to-wire win in the British Open. He celebrated with friends in England, took the jug out for a night on the town in Belfast with his buddies, and brought it with him when he returned home to Florida. And yes, it’s with him at Firestone this week at the Bridgestone Invitational.

“I’ve sort of been taking pictures of it beside the TV and on top of the toilet and wherever it’s been,” he said. “It’s definitely nice to have it in my possession.”

And now it’s back to work.

McIlroy had two trigger words that helped him at Royal Liverpool – “process” and “spot.” They helped him focus on his long game and his putting.

He brought out a new word Tuesday at Firestone – forward.

“I think every time you have success, you need to reassess your goals because it’s only halfway, two-thirds through the season,” he said. “And a lot of the goals that I set myself for the start of the year I’ve achieved already. So that’s when you have to reassess and say, `OK, you’ve boxed that off. It’s great. Celebrate it for a couple of days.’ But then you’ve got to move on.”

There are plenty of goals right in front of him.

McIlroy has never won a World Golf Championship, and the Bridgestone Invitational offers a great chance. Firestone is a big golf course, typically south, one that requires plenty of power, and McIlroy has that. It was at Firestone two years ago when McIlroy closed with a 68, which he cited as a key to winning the PGA Championship the following week at Kiawah Island.

And then there’s next week at Valhalla. As much as McIlroy is looking ahead to Augusta National next April and a chance to win the career Grand Slam, he wouldn’t mind getting his fourth major at the PGA Championship.

Also at stake is a chance for the 25-year-old from Northern Ireland to return to No. 1 in the world. He would have to win the Bridgestone Invitational, and Adam Scott would have to finish outside the top five.

McIlroy sounded as if he was all business.

He had a few media opportunities after winning The Open, and then headed to London for some fitness testing. After a corporate outing for one of his sponsors, he flew over to Florida and spent the rest of the time practicing for a big stretch ahead of him.

“Just decided I wanted to move on and move forward,” he said.

He has a history of moving forward. Two years ago, McIlroy followed his PGA Championship win at Kiawah Island by winning back-to-back tournaments in the FedEx Cup playoffs to wrap up his first PGA Tour money title, and then he won in Dubai at the end of the year to capture the European Tour money title.

“I didn’t want to rest on that,” he said. “I’d already had a pretty good year, but I wanted to just keep going.”