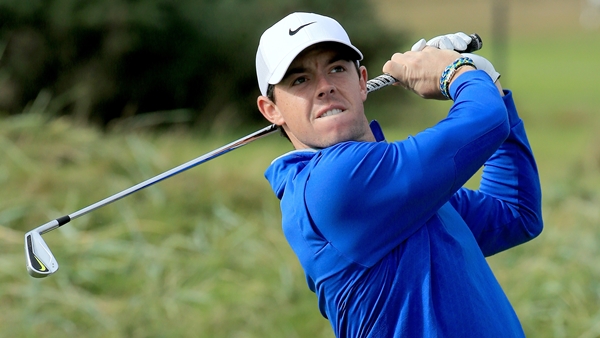 ST. ANDREWS, Scotland – One incredible month of golf was enough for Rory McIlroy to be voted PGA Tour player of the year.

The award was announced on Wednesday and surprised no one. McIlroy won the award, which is a vote of PGA Tour members, for the second time in three years.

He joined Tiger Woods, Greg Norman and Nick Price as the only multiple winners of the Jack Nicklaus Award since it began in 1990.

“I’d like to win a lot more in my career, and I feel like I can,” McIlroy said from St. Andrews, where he is playing in the Dunhill Links Championship.

McIlroy and Jimmy Walker each won three times on the PGA Tour, though the size of the trophy tilted heavily in favor of the 25-year-old from Northern Ireland. McIlroy went wire-to-wire to win the British Open, rallied from three shots behind on the final day at Firestone to capture his first World Golf Championship, and won the PGA Championship with a sterling back nine at Valhalla.

He became only the seventh player to win the final two majors of the year, and the first since Padraig Harrington in 2008.

McIlroy failed to win on the European Tour or on the PGA Tour in 2013 during a turbulent year when he switched out all of his equipment, and would end up in a legal mess after leaving his management company.

He also struggled with a phenomenon that became known as “Freaky Friday” for taking himself out of tournaments with bad second rounds. He solved that enigma and roared back to No. 1 in the world with a solid year that became spectacular with his two major titles.

McIlroy also led the PGA Tour with 12 finishes in the top 10, and he never finished worse than 25th. He also won the PGA Tour money title with just over $8.2 million, and he won the Vardon Trophy for the lowest adjusted scoring average.

The tour does not release vote totals.

“I guess it just makes me realize that even though last year wasn’t the year I wanted, the last three or four years have been very, very good,” McIlroy said. “It gives me even more motivation to go on and work harder and try to win more tournaments, more majors, and be involved in more Ryder Cups like last week.”

The PGA of America’s award for player of the year is based on points, and effectively ended when McIlroy captured his second major. Just like two years ago, he is virtually certain to win the money title on both sides of the Atlantic, and sweep the significant awards in Europe.

“Being voted player of the year by your peers is something that’s important,” he said. “They are the guys that you play week in and week out, and the guys you are trying to beat week in and week out. And if they appreciate what you’ve done over the year, and see the hard work you’ve put in, and golf you’ve played, and think that’s been the best of the season, that’s something that means a lot to me.”

Chesson Hadley of the U.S. was voted PGA Tour rookie of the year.

Hadley won the Puerto Rico Open, which was held opposite a World Golf Championship at Doral. Among the three rookies on the ballot, he was the only player with a PGA Tour victory, and the only one to advance to the third round of the FedEx Cup playoffs.