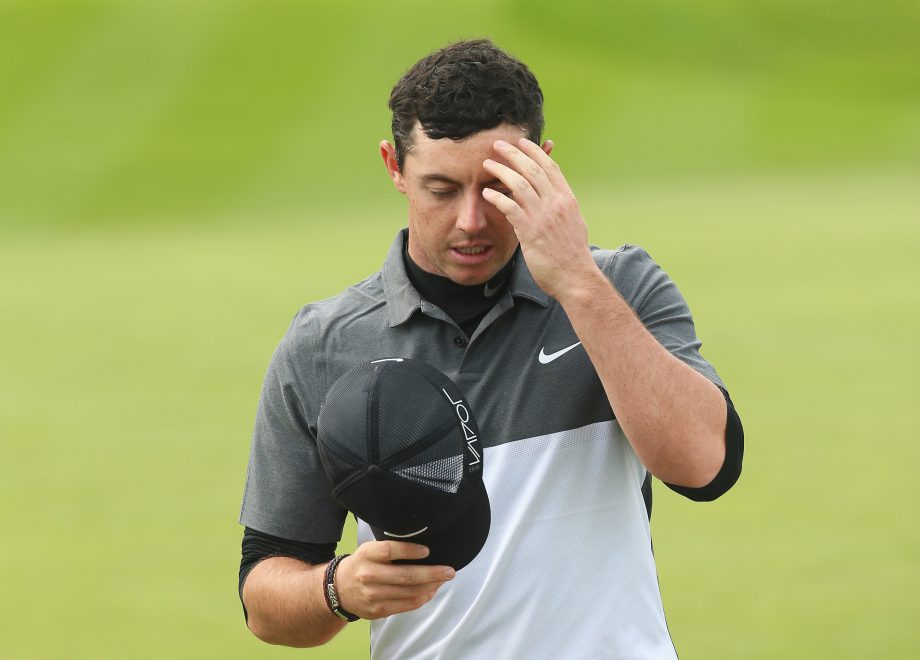 VIRGINIA WATER, England – After winning two titles in three weeks, Rory McIlroy ran out of steam. Now he’ll have the whole weekend to get some rest.

McIlroy missed the cut at the BMW PGA Championship at Wentworth on Friday after an erratic 6-over 78 at the European Tour’s flagship event.

A week after winning the Wells Fargo Championship by seven shots, the top-ranked Northern Irishman made six bogeys and a double bogey on the par-four 11th, leaving him at 5-over 149 and four strokes outside the cutline. He was 15 shots behind leader Francesco Molinari, who shot a 69.

Playing his fourth straight event – he also won the Match Play Championship three weeks ago in San Francisco – McIlroy’s round was littered with wayward tee shots and feeble putting, which he put down to fatigue.

“I was trying to muster some birdies on the back nine but could not get anything going,” McIlroy said. “Coming off the back of three good weeks in the United States, I am in need of a rest. I’ll dust myself off for next week (at the Irish Open) and not read too much into it.”

McIlroy stuttered on the front nine, going out in 36 with two bogeys and a birdie before his round unraveled at the turn.

He bogeyed the 10th and on the 11th, hooked a wild shot off the tee into trees on the left for an unplayable lie, before sending his next attempt into the crowd.

He ran up a six that left him 4 over and slid further down the leaderboard with bogeys on 13, 16 and 18, where he ended his day with a three-putt from 20 feet.

“I can take a couple of days at the weekend to refresh mentally,” McIlroy said. “It was inevitable that a good run was going to come to an end but I would love to be here for the weekend.”

Molinari started with two bogeys on his first three holes but recovered with five birdies, including three on the back nine, to take a 1-shot lead into the third day.

“The start was very difficult, it was not as good as Thursday,” Molinari said. “But I managed to steady the ship. I made a couple of birdies to get even par before the turn and with this wind on the back, you can get a few birdie chances and I took three of them.”

Byeong Hun An shot a flawless 64 to move into second.

The South Korean made a blistering start with five birdies on the front nine, before moving a shot behind Molinari with three more on the way in.

“I hit it really solid today and didn’t have to putt over 30 feet,” Hun An said. “I still missed a couple out there. I haven’t been putting well all year but got going and made the most of it today.”