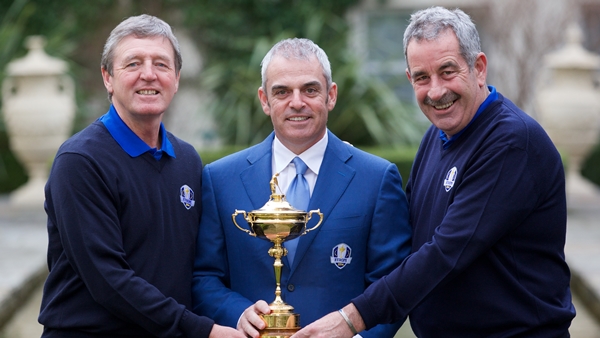 Torrance captained Europe to victory in the 2002 event, when McGinley holed the winning putt at the Belfry. The 61-year-old Smyth has played in the Ryder Cup twice and was Ian Woosnam’s assistant in the 2006 competition at the K Club.

“They first came to mind to me when I was put in position as Ryder Cup captain last January,” McGinley said. “These two men have been a sounding board for me, both personally and professionally, and have proved time and again to me with their ability and passion and judgment that they are ideal for the role.”

McGinley said his other assistants will be announced after the team is formalized in September.

McGinley has known Smyth since he was a teenager and described his fellow Irishman as a “mentor” during his professional career.

“In many ways, he was a natural choice for me,” McGinley said. “As a vice captain to Ian Woosnam at the K Club, I found him to be very inspirational, astute, a voice of reason with great clarity of thought.”

Torrance’s appointment ensures there will be Scottish representation in the European team at Gleneagles.

He has been a close friend of McGinley since the 2002 Ryder Cup, when Torrance’s decision to stack the top order of the singles with his best players made an impression on the current captain.

“I felt, tactically, he made so many right calls, he understood the players, what the Ryder Cup was about,” McGinley said. “His ability to motivate the players and communicate with them had a lasting impression on me.”

Torrance said he and Smyth would act as a buffer between the players and McGinley.

“If I could do a tenth for Paul’s team of what he did for my team,” Torrance said, “we will both be very happy men.”

McGinley said Smyth will be vice captain to Miguel Angel Jimenez in the Eurasia Cup in Kuala Lumpur on May 27-29.