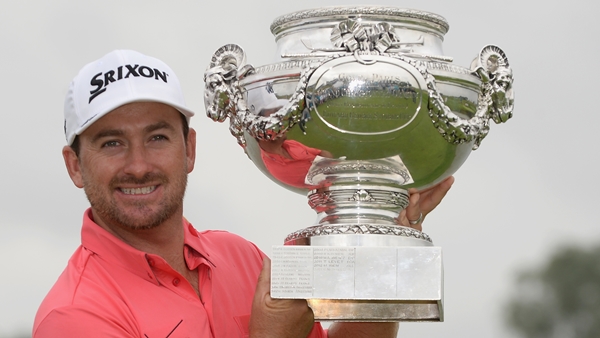 SAINT-QUENTIN-EN-YVELINES, France – Graeme McDowell of Northern Ireland came from eight shots back to retain his French Open title Sunday, shooting a 4-under 67 in pouring rain to win by one shot.

McDowell made the best of the tough conditions, making five birdies and a bogey for the lowest round of the day to finish with a 5-under 279 total.

“That goes back to my upbringing a little bit in my teens, playing through all weathers and conditions,” McDowell said. “Playing golf in bad weather is an art form. Some guys are good at it, some guys are not.”

Overnight leader Kevin Stadler only managed a 76 to share second place with Thongchai Jaidee, who carded a 72. Stadler still had a chance to win it on the last hole, but he missed a long birdie putt. He then failed to even force a playoff when he missed a three-footer for par.

“I think it’s very hard to lose the same tournament twice on the same day and I managed to do it,” Stadler said.

McDowell had seven top-10 finishes this year on the European Tour and PGA Tour before entering this tournament.

“I’ve pretty much thought of myself a decent bad weather golfer, until the last five years,” McDowell said. “I feel like I’m spending a little bit too much time in America. I’m a little bit soft, and I needed that type of a day.”

Stadler went into the final round with a four-shot lead over Thongchai and Victor Riu. He even got a five-stroke cushion when Riu found water off the tee of the second hole for a double bogey.

Soon, Stadler put himself in trouble by missing short par putts on No. 4 and No. 6. He then double-bogeyed No. 7 by hooking his tee shot into the rough before missing the fairway with his second shot.

Another errant tee shot from Stadler on No. 8 gave Riu a share of the lead.

“It was absolutely miserable,” Stadler said about the weather. “We don’t play in that stuff in the States.”

Four players then shared the lead when McDowell and Jamie Donaldson made birdies on the 13th and 14th, respectively, to join Stadler and Riu atop the leaderboard.

McDowell sank a birdie putt from more than 20 feet on No. 16 to move three strokes clear. But Stadler made a strong charge to get back into contention, tying the defending champion with a birdie on that same hole.

After finishing his round, McDowell was preparing for a playoff with Stadler, but a huge roar from the crowd told him the American had missed his par putt.

“Last night, I didn’t think I had a shot,” McDowell said. “I had a glass of wine or two last night to kind of drown my frustration.”