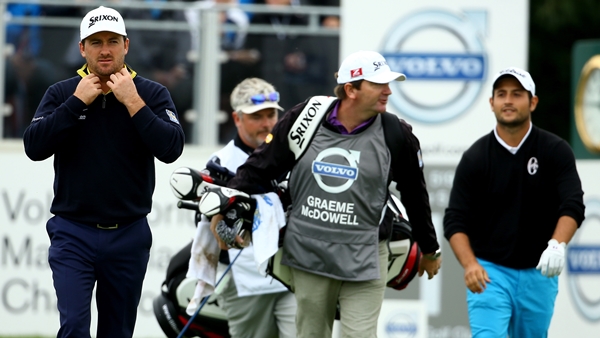 ASH, England – Defending champion Graeme McDowell and Victor Dubuisson began the World Match Play Championship with comfortable wins on Wednesday, three weeks after teaming up as one of Europe’s top pairings in the Ryder Cup at Gleneagles.

McDowell had a 3-and-2 victory over Alexander Levy, who won the Portugal Masters on Sunday, and Dubuisson beat Pablo Larrazabal by the same score in the first of three group matches at The London Club in southeast England.

“Historically in this event the last couple of years I have been getting off to slow starts and you don’t want to put yourself in the hole against good players,” said McDowell, who was 4 up after 10 holes against Levy in the first match of the day. “So a good start for me was key. … I got going with the putter and was able to build a winning lead.”

Henrik Stenson, at No. 5 the highest-ranked player in the 16-man field, halved his match with George Coetzee of South Africa. Two other members of Europe’s Ryder Cup winning team, Stephen Gallacher and Jamie Donaldson, lost to Shane Lowry and Paul Casey, respectively.

Patrick Reed, the U.S. team’s top points scorer in Gleneagles, opened with a 2-and-1 loss to Jonas Blixt.

Reed won 3 1/2 points in the Ryder Cup in his first appearance in the competition.

Blixt went ahead with a birdie at No. 7 and was never behind after that.

“It was one of those days where both of us played pretty solid, but at the end of the day I didn’t really make anything,” said the Texas-born Reed.

Other players to start with wins were Joost Luiten and Thongchai Jaidee, who lost to McDowell in last year’s final.

The second matches of the round-robin stage will be played Thursday.

McDowell and Dubuisson won both of their foursomes matches in Gleneagles. They carried their good form over to The London Club, which is staging the 50th anniversary edition of the World Match Play.

McDowell, who lost in the 2012 final to Nicolas Colsaerts, was 2 up after five holes and 3 up through seven before winning another hole on No. 10.

“There are no easy matches out here and we always say that in match play as there are 16 quality players here this week – and especially being up against a guy coming off a victory last week,” McDowell said.

Dubuisson, who reached the final of the Match Play Championship in Arizona in February, was never behind against Larrazabal and was 3 up after nine holes.

Coetzee, ranked No. 89 and a late injury replacement for Thomas Bjorn, birdied the last hole for a half point against Stenson at the end of a fluctuating match in which neither player was more than 1 up.

“I am bit of a dark horse this week, I guess, as I was maybe going to go to South Africa to play a Sunshine Tour event,” Coetzee said. “But when I got the call, I was obviously excited and nice to be here and nothing to lose.”

The top two players from each of the four groups advance to the quarterfinals on Saturday. The semifinals and final are on Sunday.