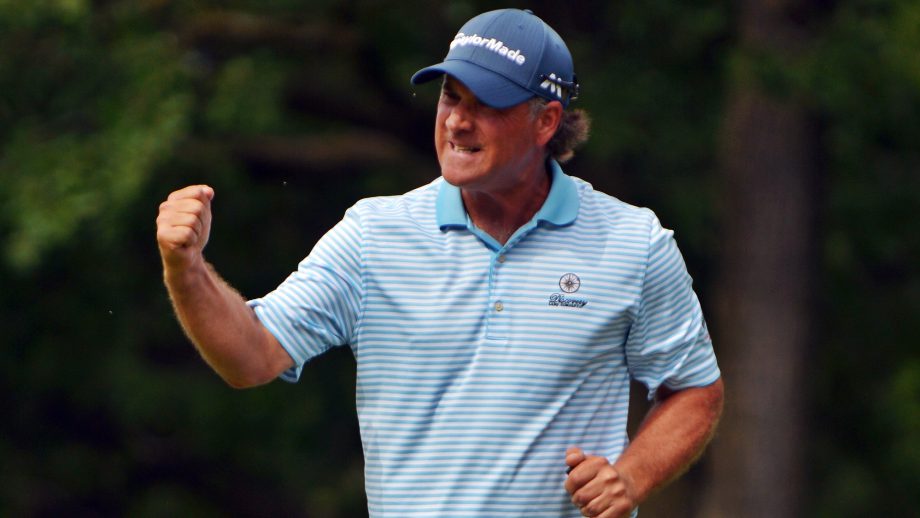 RICHMOND, Va. – Scott McCarron came into the season with a goal of winning the Charles Schwab Cup Championship.

He put himself in position to do just that Sunday in the Dominion Charity Classic, making a 6-foot putt on the first hole of a playoff with Tom Byrum to win the second of three PGA Tour Champions playoff events. McCarron will start next week in Scottsdale, Arizona, second in points to two-time defending champion Bernhard Langer with the cup on the line.

“I think it’s awesome. Bernhard Langer’s had a great year, a phenomenal year, one of the best years ever, but it’s a playoff. You’ve got to play well in the playoffs,” McCarron said, who moved into the top five in the rankings by finishing sixth last week in California. “If I can play well next week, I control my own destiny.”

The three-time PGA Tour champion won the Principal Charity Classic in Iowa in June for his first senior victory.

“Any time you win an event, you’ve got a lot of good feelings about your game, you’re playing well. To win in a playoff in the fashion I did just gives you a lot of confidence,” he said. “For me, going into next week, again, I’m second in the Schwab Cup, and if I can win, I can win the Schwab Cup, which I think is amazing.”

McCarron, one of the longest hitters on the tour for players 50 and older, did most of his scoring on the longest holes.

“I thought that if I could take advantage of the par 5s, I could possibly have a great tournament, and I certainly did that for most of the week,” he said.

For the season, McCarron has had birdie or better on 54 per cent of par 5s. This week, be birdied nine out of 13, including the playoff hole.

McCarron and Byrum each shot 3-under 69 in regulation to finish at 13 under on the James River Course at The Country Club of Virginia. Byrum created the tie with a birdie at the 16th hole. Both made pars on the next two holes before McCarron’s winning putt on the extra hole gave him his second victory this season.

Byrum, seeking his first victory in a PGA Tour-sanctioned event since the 1989 Kemper Open, putted first, but his 15-foot putter slid past on the left edge. McCarron then rolled a slightly bending putt into the centre of the cup.

“I hit that putt just like I wanted,” said Byrum, who left soon after the loss to catch a plane. “I thought I made it.”

McCarron had missed a birdie putt on the 54th and final hole of regulation to necessitate the playoff.

Kevin Sutherland shot a course-record 63, with seven birdies and an eagle, to tie for third with Brandt Jobe (67) at 11 under.

Fred Funk was alone in fifth at 10 under. He closed with four consecutive birdies for a 67.

Sutherland also challenged for a coveted top five-spot in Scottsdale. But he needed McCarron to falter and, when the 51-year-old did not, Sutherland wound up sixth in the standings.

The points were reset after the event, so that the top five -Langer, McCarron, Colin Montgomerie, Joe Durant and Miguel Angel Jimenez – only have to win the season finale at Desert Mountain to capture the Charles Schwab Cup.

Langer, who played despite a sore knee that kept him out of last week’s tournament, would have locked up the championship weeks ago because of his huge lead in the player standings, but the first-year format means he has to play to claim the title. He shot a 71 on Sunday to tie for sixth at 9 under.

“Glad I played. I know what to work on, a couple of things that weren’t firing,” said Langer, who also won the Cup in 2010 and was the dominant player on the circuit this season. “Spend the next few days working on that and hopefully be ready next week.”

Rod Spittle tied for 39th thanks to a 3-over 75 Sunday. Ames carded a final round even-round of 72 to finish 51st.

Neither Spittle or Ames were among the top 36 who will move on to the Charles Schwab Cup Championship in Scottsdale.