McCann readies to get back to work 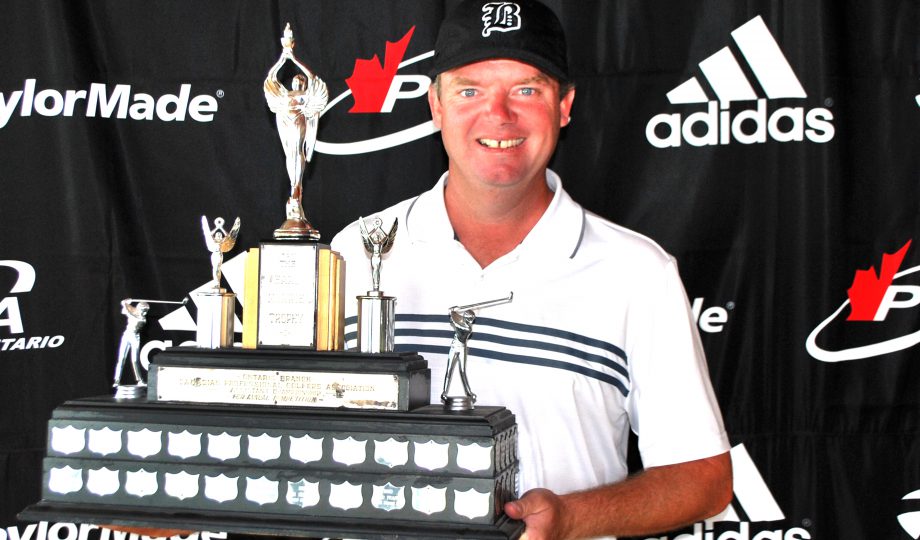 With the end of hockey season in sight for the McCann Family, it’s time to drop the sticks and pucks in favour of golf clubs and balls.

While Carter, 10 and Cameron, six, won’t be making any money for the McCann Family anytime soon, their dad is looking forward to getting back on course and playing some competitive golf.

“I love watching them play. I always wanted to be a pro hockey player but I was too small, so to be back in the rink watching both my guys playing the game gives me a lot of joy,” says McCann, who will be looking to make it three in a row in 2016, when it comes to PGA of Ontario Player of the Year honours.

After sharing the shuttling duties of taking the boys to the rink six days a week with his wife Wendy, Brian, who also plays men’s league hockey, will be back on the tee May, 2nd for the first scheduled event of the season, playing with Kieran Harris in the two-person scramble Assistants’ Team Series at King’s Riding GC – one of the few PGA of Ontario events that McCann doesn’t have his name etched as a winner.

“Every time I go out there and tee it up, I’m there to win. I developed that mentality when I was playing junior golf and when I attended Arkansas State University and that hasn’t changed over the years,” says the 41-year-old, who is entering his third season as an associate professional at Brampton Golf Club, where he works in the golf shop and on the range giving lessons and coaching.

“I think I have just learned to manage my game better. When I play well, I don’t make a lot of mistakes. I’m not going to go out there and have six birdies and six bogeys, maybe just one or two bad shots. For me the difference between winning and losing really comes down to putting. If I shoot a 65, the putter is working, when I shoot a 71, the putter doesn’t work.”

“Overall I was very happy with my play throughout 2015, the only disappointments were the PGA of Ontario Championship (T8) and the PGA of Canada Championship where I didn’t make the round of 16,” says McCann, who led the PGA of Canada order of merit standings in 2011 and 2012, before dropping out of the top spot in 2013. “My goal is to get back to the No. 1 position in Canada, to go head-to-head against all the best players in the country, and we’ll see if I can get back on top in 2016.”

McCann says that now that he works full-time in the golf shop at Brampton Golf Club, it’s more challenging to get time away from the club to play competitive golf and then there are lessons on top of that. Brian also says he’s very lucky to have a head professional, Emerson Mahoney, who recognizes that McCann loves to compete and arranges a flexible schedule that works.

“I’m really looking to try to find a balance between work at Brampton GC, competitive golf and time with my family,” says McCann, who admits to not having practiced hitting balls on the range for more than 10 consecutive minutes in the past five years. “What I have come to realize over the last couple of years is why so many professionals say they don’t have time to play tournament golf. It’s just a very busy schedule, and difficult to be everywhere you’d like to be.”

McCann says he’s excited to see how the new partnership with the PGA of Ontario and Kenesky Murray Golf Services (Jim Kenesky and Colin Murray) when it comes to tournament play in 2016 and beyond. The two veteran PGA of Ontario members will be managing all of the non-team events for the PGA of Ontario this season, as well as Great Lakes Tour events, which McCann is considering playing, as well as the Mandarin Tour.

Five years from now, McCann says he can see himself as a head professional at a club in the Greater Toronto Area, and until then, there’s lots of golf to be played. “Playing golf for fun doesn’t get my juices going. I still love the competition. Whether it’s the PGA of Ontario or the PGA Tour the goal is to win,” says McCann who played on the Web.Com Tour from 2004 to 2006.