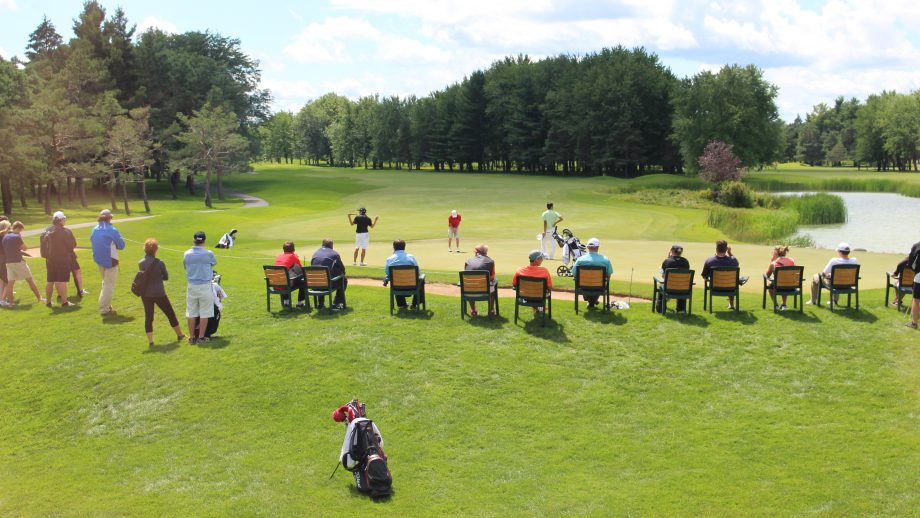 Maxwell Sear shared the 36-hole lead of the national championship heading into today’s third-round. The Unionville, Ont., native was able to finish the day with an even-par 72.

Sear had a rough start this morning with three bogeys in the first five holes. “I started off a little slow but I settled down with a birdie on 9 and then another on 12 which was a good birdie because it was playing into the wind so it was a tough hole,” said Sear of this third-round.

Sear was able to keep his round in control and stay at even-par for the tournament at 216. Sear’s impressive 2015 season includes a win at the Ontario Junior Boys Spring Classic, a runner-up finish at the CN Future Links Ontario Championship and a tie for third at the Ontario Men’s Amateur.

“Whenever you give yourself a chance to win it’s always nice. It’s going to be exciting going into the back-nine tomorrow,” said Sear when asked about playing in the final group Thursday.

Sear will be challenged by the three individuals tied for second-place at 217. Quebec products Charles-Éric Bélanger of Québec City, Brandon Lacasse of Châteauguay and Raphaël Lapierre-Messier of St-Jean-sur-Richelieu are only one stroke off the lead, each hoping to become the first Canadian Junior Boys Champion from Quebec since André Nols won in 1976.

Opening-round co-leader Bélanger also continues to lead in the Juvenile division after a round of 1-under 71 today. Bélanger was able to reach 4-under par until making a bogey on hole 13. He made four pars before a disappointing double bogey on 18 to post one of only two under-par scores on Wednesday.

Lacasse moved up the leaderboard to finish in second-place with a third-round of even-par that was highlighted by an eagle on the par 5 hole 14. Lapierre-Messier fell back from his 36-hole share of the lead to join the trio at 1-over 217 after a third round 2-over 74. He made three straight birdies from holes 8 to 10.

The tight leaderboard has an additional two players, A.J. Ewart of Coquitlam, B.C., and Kevin Gordon of Whitby, Ont., at 2-over 218 tied for fifth place. In the Juvenile division, A.J. Ewart is only one behind Bélanger’s lead.

In a tie for third place in the Juvenile division are Tristan Mandur from Mill Bay, B.C., and Jack Simpson  from Aurora, Ont., at 7-over 223.

Team Canada’s Development Squad member Patrick Murphy of Crossfield, Atla., signed for a round of 2-over 74 to sit T14 heading into tomorrow’s final round.

The final round of the 2015 Canadian Junior Boys Championship will begin tomorrow at 7:30 a.m. EST with the leaders teeing off at 9:42a.m.