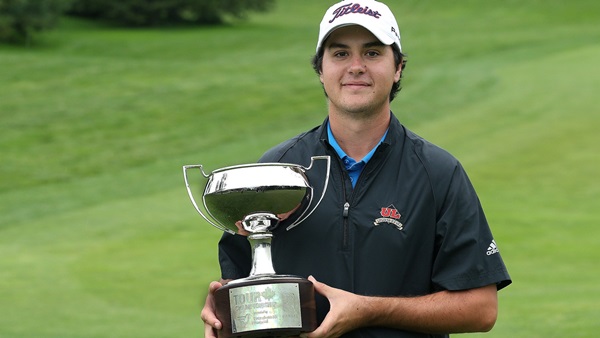 Quebec’s Max Gilbert made a clutch 20-foot birdie on the 17th hole on Sunday to win PGA Tour Canada’s Tour Championship, but it was Mackenzie Hughes who prevailed to top the Order of Merit and win a spot on the Web.com Tour next year.

“It is not the way I wanted to finish off, but I got where I wanted to by the end of the year,” says Hughes from Dundas, Ont. “Overall it has been a great season. It is incredible to see all the great players and all the Canadians I managed to come ahead of.”

With $52,114.29, Hughes, a two-time Canadian Amateur winner in his rookie year on PGA Tour Canada, finished nearly $10,000 ahead of second-place Riley Wheeldon, who was the only player in the Top 5 on the Order of Merit to play the weekend at Sunningdale Golf and Country Club. Wheeldon finished T24 after shooting even par on day when light rain fell on a calm golf course to hold his spot on the money list.  The Top 5 on the Order of Merit gained status on next year’s Web.com Tour, while the next five players received conditional status.

The only movement came from American Mark Hubbard who knocked PGA Tour Canada veteran Joe Panzeri out of the Top 5. Hubbard finished third on the Order of Merit, with Hugo Leon and Wil Collins rounding out the list.

PGA Tour Canada President Jeff Monday said the potential for volatility in the final tournament was the tour’s goal.

“We wanted a lot to be on the line where there’s a lot of pressure on the guys that are playing,” said Monday. “You look at the potential for changes in the Top 5, or the Top 10 and the opportunity was there.”

Gilbert, 23, from Saint-Georges, didn’t shake up the top of the money list, but he did turn some heads with his strong play. Largely unknown heading into the tournament, though he did play in the 2011 U.S. Amateur, Gilbert made a single cut in three tournaments this year, finishing T22 at the Players Cup in Winnipeg after Monday qualifying. That was good enough to gain him a spot in the Tour Championship and Gilbert took full advantage of the opportunity.

He came into the final round one shot off the lead held by Trevor Murphy, a former Web.com Tour player who shot an impressive 4-under on the day. But that wasn’t good enough to keep pace with Gilbert, who came into the final hole with a one-shot lead. When Murphy hit his approach below the hole on 18, Gilbert said he was prepared for a possible playoff. However, Murphy’s 16-foot putt slid by, and Gilbert’s two putt was good enough to finish at 6-under par for the day and cement his victory. The win gives him an exemption into the second stage of Web.com Tour qualifying school and full status on PGA Tour Canada.

But Gilbert, whose father Noel caddied for him during the tournament, wasn’t resting after his win. The pair were preparing to pile into their car and make the long drive back to Saint-Georges.

Asked if maybe he could use his newfound winnings to stay in London and unwind after his success, Gilbert paused momentarily.