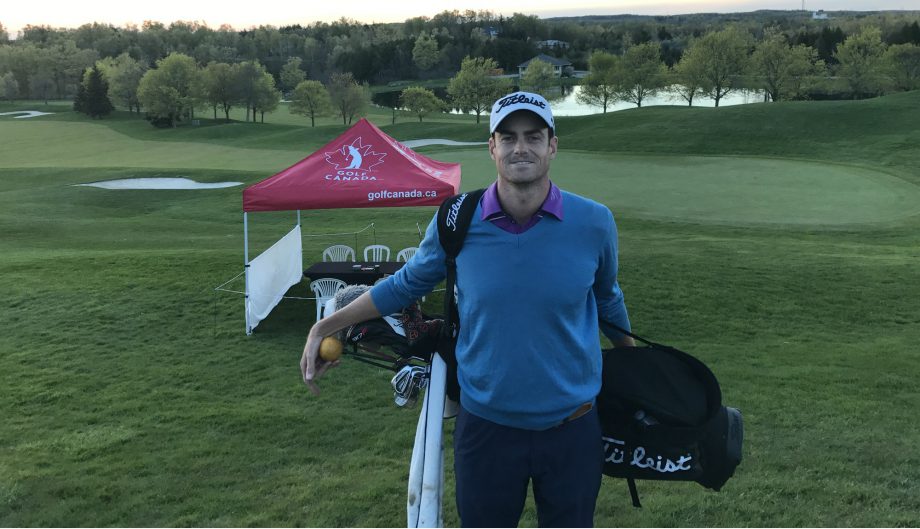 Matt Hill of Brights Grove, Ont., defeated  Jesse Smith of Oshweken, Ont., in a playoff at Blue Springs Golf Club in Acton, Ont., to top the second of three Regional Qualifying events and secure his spot in the 2017 RBC Canadian Open at Glen Abbey Golf Club in Oakville, Ont., July 24-30.

“I know I can play well in a tour event and draw on some of the past experiences I’ve had,” said Hill. “I know how to handle myself in certain situations due to certain things I’ve done in the past and I think that will benefit me this year at the RBC Canadian Open.”

Hill, who won the NCAA Division I Championship in 2009 while at North Carolina State, went out in a 1-under par, 35 on the front nine.

He then caught fire on the back nine, recording four birdies and no bogeys, to card a 5-under par 67.

“I had a few good chances on the front nine and only shot 1-under and I kind of stuck with the positive attitude and told myself that since I missed a few I was going to start making some, so I made a few on the back nine,” said Hill.

Smith equaled Hill’s round of 67 by recording six birdies, three bogeys and an eagle on the par-5 12th hole.

Hill and Smith both teed off early in the day, Hill at 9:09 a.m. and Smith at 9:20 a.m. The playoff didn’t wrap up until around 8:30 p.m., so both players had to deal with a lengthy break between finishing their round and starting the playoff.

“After I just kind of relaxed for a couple hours, I went out a few hours before the playoff, and just got in a full pre-round warm-up,” said Hill. “I stretched, putted, chipped and hit a few, just to make sure all the parts of my game were ready to go.”

For the playoff, Hill and Smith replayed the par-4 18th hole. Smith bogeyed the first playoff hole, while Hill converted a two-putt par from 15 feet, to clinch victory.

143 golfers competed in the tournament vying for a spot in the final RBC Canadian Open Qualifier, on July 24th at Heron Point Golf Links in Ancaster, Ont.

In addition to Hill advancing directly to the RBC Canadian Open, 21 golfers advanced to the Final Qualifying event.

Peter Campbell, a resident of Windemere, Fl., and  a member of the PGA TOUR Latinoamérica, came in solo third, carding a 4-under par 68.

The highest-ranking amateur was Joshua Montgomery, who fired a 1-under par, 71, finishing T6 with two other golfers, and advancing to the final qualifier at Heron Point, in his hometown of Ancaster.

Brantford Ontario’s Stephane Dubois, was part of a group of six who finished T9, at even par, his second strong qualifying performance in recent weeks, after winning medallist honours at Golf Canada’s U.S Open Local Qualifier at Beacon Hall Golf Club, in Aurora, Ont., on May 8th.

In total, there are three regional qualifying events, each consisting of 18 holes of stroke play. Provided there are 100 or more players in the field, as was the case at Blue Springs, the low qualifier receives an exemption directly into the 2017 RBC Canadian Open.

The first RBC Canadian Open Regional Qualifier at Bear Mountain Resort, in Victoria, B.C., on May 9th, saw Keith Martin and Derek Barron win medallist honours, securing their spot, along with four other golfers, in the Final Qualifying event.