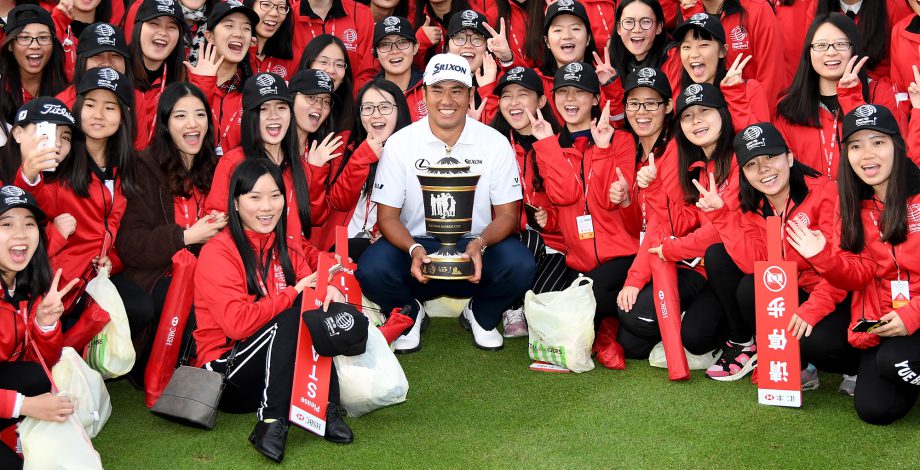 SHANGHAI – Hideki Matsuyama waved to a cheering crowd from the top balcony of a corporate suite over the 18th green at Sheshan International, where moments earlier he finished up a thorough beating of a world-class field in the HSBC Champions.

And the 24-year-old Japanese star can only hope that he’s just getting started.

Matsuyama never gave anyone a chance Sunday, closing with a 6-under 66 for a seven-shot victory that made him the first Asian to win a World Golf Championships event since the series began in 1999.

And it was only fitting that he won at the event billed as “Asia’s major.”

“He was brilliant,” said defending champion Russell Knox, who played in the last group and was along for the ride. “No weaknesses the last two days. He drove the ball well and far, and his iron play was very good. And he made it look very easy.”

The only trouble came when it no longer mattered. Matsuyama realized that one last birdie would give him 30 for the week, so he went for the green on the par-5 18th and his shot bounced out of a bush and tumbled into the water. No problem. He took his drop in the rough, hit wedge to 18 feet and made one last putt to extend a streak of playing the final 45 holes without a bogey.

He really didn’t need any of them.

Matsuyama finished at 23-under 265, one short of the tournament record that Dustin Johnson set three years ago. He won by seven over British Open champion Henrik Stenson (65) and Daniel Berger (69).

One week after becoming the first Japanese player since Jumbo Ozaki in 1998 to reach the top 10 in the world, the victory moved Matsuyama up to No. 6.

There was one moment early in the round when it looked as though there would be a two-shot swing would have cut his deficit to two shots over Berger. Matsuyama made his 15-foot par putt on the par-3 fourth hole, hit his approach to 4 feet on the next hole for birdie and was on his way. Three straight birdies on the back nine, including a 9-iron out of the rough on the tough 15th that settled 3 feet away, turned this into a rout.

“I’ve never won by that many even in Japan,” Matsuyama said.

It was the largest margin of victory in the HSBC Champions, and the largest in a WGC event since Tiger Woods won by seven in the 2013 Bridgestone Invitational.

He won for the 10th time in his career, and his third PGA Tour-sanctioned victory tied him with Shigeki Maruyama for most by a Japanese player. Matsuyama won the Memorial in 2014, and he won the Phoenix Open in February in a playoff over Rickie Fowler.

“Shigeki Maruyama is a good friend of mine, and he always said that I was going to pass his records,” Matsuyama said. “But at least I’ve tied him now. That was a great honour, because I have great respect for him.”

The next stop is a major. Y.E. Yang at the 2009 PGA Championship is the only Asian to win a men’s major.

“Winning today I feel has got me closer to being able to compete a lot better in the major tournaments, and so my next goal is, of course, to win a major,” he said. “And I’m going to do all that I can to prepare well for that.”

In the last three weeks since he finished his best PGA Tour season with fifth place at the Tour Championship, Matsuyama won the Japan Open, was runner-up in Malaysia to Justin Thomas in the CIMB Classic, and then won his biggest tournament yet.

“Hideki played just unbelievable and it was a pleasure to watch. You can learn a lot from watching Hideki play,” Berger said. “He’s struck it well. He’s putted well. He’s chipped well. He’s done everything well, and that’s why he’s won by so many.”

Knox, playing in the final group for the second straight week, closed with a 74 and tied for ninth.

Rory McIlroy closed with a 66 to share fourth with Bill Haas (69). McIlroy said he would skip the Turkish Airlines Open next week, presumably because of security concerns over recent weeks, which makes him a long shot for the Race to Dubai on the European Tour.

Masters champion Danny Willett remains in front. Stenson’s 20-foot birdie putt on the last hole gave him a share of second, which at least helped him close the gap. He also moved up one spot to No. 4, knocking Jordan Spieth down one notch.