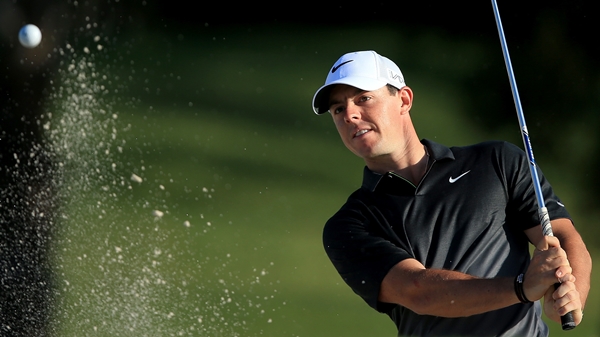 DORAL, Fla. – Rory McIlroy says he is not thinking about the history that waits at the Masters, even though that’s all he seems to be talking about.

It’s not all his fault, of course.

Coming off his first missed cut in eight months at the Honda Classic, McIlroy leads the strongest field of the year at the Cadillac Championship. It’s the first time since the 2012 PGA Championship, which he won at Kiawah Island, that everyone in the top 50 of the world ranking are in the same tournament.

But he can’t avoid the questions about the Masters, where the world’s No. 1 has a chance to become only the sixth player to complete the Grand Slam. Boy Wonder is only 25, and so this won’t be his last chance to pick up the last leg. But having won the British Open and the PGA Championship last summer, it could take him one big step closer to joining Tiger Woods as the only player to hold all four major titles at once.

That’s a lot on the plate. That leads to a lot of questions.

And that’s OK with McIlroy.

“I think I’d rather have the questions, because it’s obviously a great position to be in going into Augusta and having it be the only major that I haven’t won,” he said Wednesday. “It’s not a bad position to be in. There’s always excitement and anticipation and hype that surrounds Augusta every year, and I feel it regardless if I’m going in as the favorite or under the radar or whatever.”

It’s the first major of the year. It the golf course fans know better than any other. It draws the most interest.

“There’s always hype,” McIlroy said. “There’s always buildup. My name is getting thrown around a little bit more than it used to, but I’m OK with that.”

It beats the alternative.

McIlroy began his year as a runner-up in Abu Dhabi and a winner in Dubai. He had won or finished second in eight of his previous 12 tournaments. And then he missed the cut at the Honda Classic – a tournament he won in 2012 to reach No. 1 for the first time – with rounds of 73-74.

It wasn’t a great way to start the road to the Masters. It was no time to panic, either. McIlroy worked at his home in West Palm Beach when the rain allowed, tightened up his swing, and then showed the Honda Classic might have been a mere speed bump when he shot 63 in the Pro-Member at Seminole.

He teed off Wednesday before the sun was up and worked his way around the Blue Monster in relative peace, an odd scene for the best player in golf. Only two photographers, the occasional TV camera and three fans with memorabilia in bags for him to sign (he didn’t) followed him around most of the day.

If there was ever a time to miss a cut, the Honda Classic would be a good one. It rained so hard that the tournament didn’t end until Monday. McIlroy’s biggest problem was controlling his ball in the wind, and luckily for him, it still was blowing when the rain stopped for his practice sessions.

“I just practiced and played a little bit, and at least I know going into this week where my game is,” McIlroy said. “So even if things maybe don’t go my way at some point during the round, I’ll know how to manage it a little bit better. Excited to get back at it and obviously try to put in a better performance than last week.”

The defending champion is Patrick Reed, who declared last year that he felt like he was among the top five in the world. He’s at No. 15, but at least making progress. Reed was tied for the lead at the Honda Classic with four holes to play when he went double bogey-bogey-bogey and shot 73. It was his first time over par in 20 rounds on the PGA Tour this year.

The top 50 doesn’t include Woods, who is not eligible for a WGC event for only the second time in his career. Woods has fallen to No. 75 after missing most of last year with back problems and playing only 47 holes in two events this year before saying he would take time off to sort out his game.

Henrik Stenson and Adam Scott are making their first starts on the PGA Tour, and Scott plans to use a conventional putter for the first in more than four years. Stenson will be playing with McIlroy and Masters champion Bubba Watson, a 1-2-3 pairing from the world ranking.