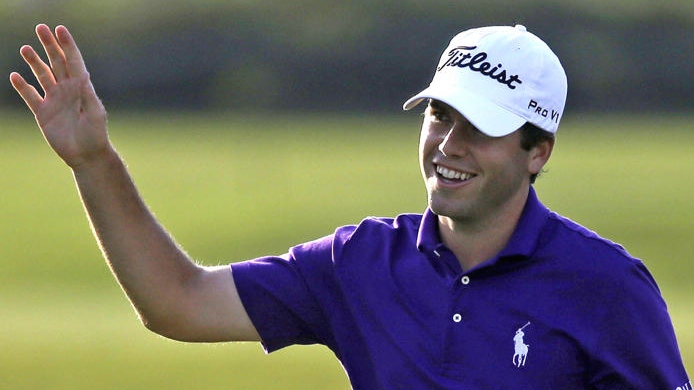 AVONDALE, La. – When Ben Martin played junior golf, his father, Jim, would tell him that his demeanor should be the same every time he walked off a green, whether he made birdie or double bogey.

That might explain why Martin seemed so calm when his game briefly unraveled Friday in the middle of the second round of the Zurich Classic, and why he righted himself quickly enough to post the best two-round score ever at TPC Louisiana.

Martin, who shot a course-record 62 on Thursday, shook off his first bogey and double bogey of the tournament to finish with a 67 on Friday, putting him at 15 under – three shots ahead of closest pursuer Andrew Svoboda.

If the 26-year-old Martin can continue to show that type of composure, he might capture his first PGA Tour victory.

“That’s my personality in general. Sometimes my wife gets mad at me because I don’t get excited about anything,” Martin said. “And then I don’t get down too much, either. That’s golf. You can’t expect to shoot 62 every day.”

Svoboda followed his opening 64 with a 68.

Robert Streb (66) and Sueng-Yul Noh (68) were tied for third at 11 under. Erik Compton also shot a 68 and was at 10 under, a score that keeps the two-time heart transplant recipient in contention for his maiden PGA Tour triumph. Tied with Compton for fifth was Peter Hanson, who shot 69, four shots off the pace of his strong opening round.

The tournament record score at TPC Louisiana- which is hosting New Orleans’ PGA Tour event for the ninth time – is 20 under, set last year by Billy Horschel.

For a while, it looked as if Martin might match that in the second round. Starting the day on the 10th hole, Martin hit an 8-iron 160 yards to a foot to set up his first birdie. On the par-5 11th, he used a 54-degree sand wedge to chip in from nearly 58 feet, one day after he chipped in with the same club from 55 feet on 17. He then sank a 7-foot putt for birdie on 13.

Martin said his hot start was cooled off, almost poetically, by the sound of ice being poured into a cooler in one of the VIP suites overlooking the par-3 17th hole. It forced him to back away from a putt attempt, and he wound up three-putting.

Then he proceeded to hit his drive into water to the right of the 18th fairway, and three-putted for a double bogey.

Yet, as he walked off the green, he smiled slightly and proceeded calmly and purposefully to the first tee, where he made the first of four birdies on his second nine.

That’s the kind of composure Martin’s wife, Kelly, has come to know well.

Svoboda, who will tee off with the final group for the first time in a PGA Tour event, continued to be pleased with his putting, which he credited in part to a new putter with a shaft bent to 71 degrees and grooves on the face.

He didn’t have a single bogey in the tournament until his final hole of the day, when he three-putted the par-3 ninth.

“I hit a bad second putt there,” he said of his miss from 6 feet. “But I dug pretty hard today. I played really well, so I’m pretty happy.”

Graham DeLeat of Weyburn, Sask., fired a 4-under 68 on Friday and currently sits in a tie for 12th at 7-under par.