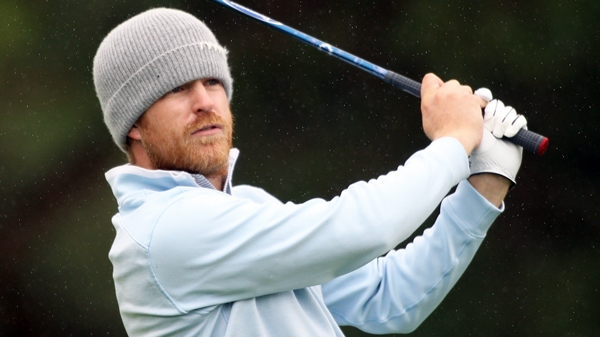 With cold, windy weather moving in overnight and staying for the duration of the day, the pair were among just 23 players to shoot under par at Sunningdale. The leading score at 68 represents the highest first-round lead of the season on PGA Tour Canada, with Marshall indicating the conditions forced the field to adjust and play with caution.

“You knew going into the round it was going to be difficult. I just tried to really stay patient,” said Marshall. “I had a real conservative game plan. Just a lot of fairways and greens, and on some holes you’re just playing for par.”

One shot behind the early leaders was a group of six players at 3-under 69, including British Columbians Ryan Williams, Adam Cornelson and Eugene Wong, as well as California’s Sean Shahi, Florida’s Jay Myers and Burlington, Ontario’s Michael Gligic.

MARSHALL FREES UP GAME WITH ’15 STATUS SECURED
Entering last week’s Cape Breton Celtic Classic presented by PC Financial, Matt Marshall knew his season – and a place to play in 2015 – was on the line.

The 29-year old began the week 59th on the Order of Merit, but finished tied for 29th to stay inside the top 60 at No. 55, earning a spot in the field in London along with exempt status for the 2015 season.

“Last week was tough on me. Very stressful, and this week feels like I can just go out and play some golf,” said Marshall.  “Last week it felt like my season for next year was determined by every shot. It’s tough to keep that going for four straight days.”

With four rounds guaranteed this week, Marshall said he was able to get out of his own way, leading to his 4-under 68 to share the first round lead.

“This week has a total different feel because there is no cut, and you can just kind of let it go,” said Marshall. “I felt no pressure and knew I could just go kind of play some golf.”

GLIGIC CONTINUES STRONG STRETCH RUN
With three top-6 finishes in each of his last three starts, Michael Gligic has been heating up at the right time late this season. At No. 9 on the Order of Merit, the 24-year old is the highest Canadian on the Order of Merit and can still play his way into The Five, needing at least a solo fourth place finish this week.

“I feel like I have pretty good control of where it’s going,” said Gligic after a 3-under 69 on Thursday that left him tied for third. “I played well. The conditions were tough. I was hitting a lot of club into the greens and just kind of managing myself well.”

“Last week I mentioned how I was really comfortable, even going into the final round,” said Gligic. “A couple of weeks prior I felt a little uncomfortable in the final group in Kingston just because it was kind of unfamiliar, having not been there in a while. I’ve definitely settled in and feel more comfortable under the gun.”

WET WEATHER HAMPERS START OF PLAY, BUT DOESN’T DETER BC NATIVES ON DAY ONE
A little cold and rain was no problem on Thursday for Vancouver-area natives Adam Cornelson and Ryan Williams on Thursday, with the pair matching each other at 3-under 69 to share third place.

“This is Vancouver in November, really,” said Williams, brushing off the challenge of some West coast winter-type weather.

“This is pretty good for the Canadian boys with this weather, but I’m happy with the round, and happy it’s done,” added Cornelson.

The wet weather wasn’t limited to Thursday’s play, either. With heavy overnight rains pushing back the start of play two hours on Thursday, the greens crew at Sunningdale – and a few other area clubs who pitched in to help – worked hard to get the course in shape, with the efforts drawing the compliments of the players.

“I think they did a great job getting play ready for today,” said Williams. “You could tell there were a lot of puddles around the course, but I don’t think anyone was complaining about the conditions.”

“There was so much rain last night, the grounds crew did a phenomenal job for us to even play. They rolled good and smooth, and my hat’s off to the grounds crew,” the 26-year old added.