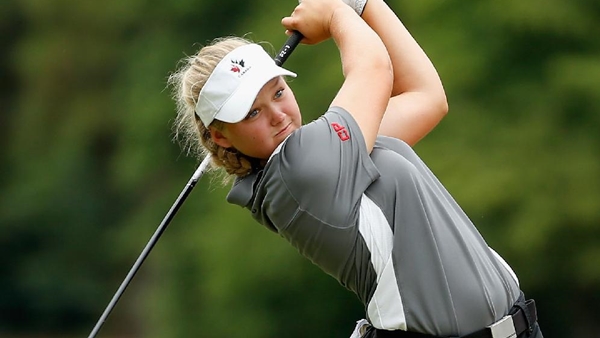 The country’s best female professional and amateur golfer highlight the field of this year’s PGA Women’s Championship of Canada presented by Nike Golf.

Alena Sharp of Hamilton, the top ranked professional female golfer in the country, looks to capture her fourth PGA Women’s Championship of Canada later this week at FireRock Golf Club just outside London, Ont. However the No. 2-ranked female amateur golfer in the world, Brooke Henderson hopes to continue her summer of impressive play and add another championship to her resume.

Two years ago, Henderson became the youngest player ever (14-years-old) to win a professional event.

Sharp, who has previously won the PGA Women’s Championship in 2004, 2011 and 2012, has made seven cuts on the LPGA Tour this year, including a T18 at the Pure Silk-Bahamas LPGA Classic, a T14 at the North Texas LPGA Shootout and a T31 at the Walmart NW Arkansas Championship. She currently sits No. 81 on the Race to CME Globe standings. This past February, Sharp won the Symetra Tour’s season-opening event, the Visit Mesa Gateway Classic.

The PGA Women’s Championship of Canada was first played in 1987 and past champions include Cathy Sherk, Gail Graham, Nancy Harvey, Lorie Kane and Jessica Shepley.

The PGA Women’s Championship of Canada will count as the third and final stop on the Canadian Women’s Tour with points awarded toward the Jocelyne Bourassa Player of the Year at the conclusion of the championship.

Other notable players in the field include past Canadian Women’s Tour winners Samantha Richdale of Kelowna, B.C., as well as Americans Michelle Piyapattra and Emily Childs.

In addition to Henderson, Team Canada members teeing it up at FireRock include Jennifer Ha, Anne-Catherine Tanguay and Taylor Kim.