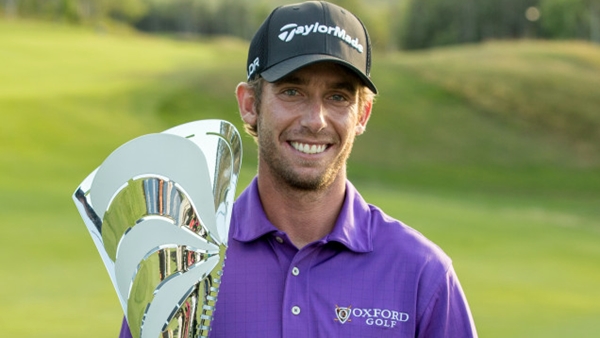 Silvers, who began the week 89th on the Order of Merit, turned his season around with the win, carding a final round 6-under 66 at The Lakes Golf Club to reach 15-under par for the week and move all the way to the 10th spot on the season-long money list with one event to go.

“I can hardly put it into words. Coming into the end of the year, I wasn’t going to have Web.com Tour status for next year and had I not played well, I wouldn’t have had PGA Tour Canada status for next year,” said Silvers, who was previously most well-known for his Big Break Greenbrier win. “To come in and play well when I had to, and to now have a chance to skip some stages and definitely have status up here for next year is so big.”

Silvers began the day three shots behind 54-hole co-leaders Michael Gligic and Dan McCarthy, but moved up the leaderboard quickly with a 3-under 33 on his opening nine. Silvers, who was bogey-free on Sunday, carded three more birdies at 10, 13 and 14 to reach 15-under, then needed to convert a tricky 6-foot par putt at 18 to post the clubhouse lead at 15-under par.

“Getting it up-and-down for par on 18 was awesome, and I had no idea where I stood,” said Silvers, who insisted he didn’t look at a leaderboard all day until the 72nd hole. “I tried to just black out. I had been putting really, really well. I just tried to not let myself think about what it could possibly mean. I felt like I was going to be in good shape regardless, and I’m glad I didn’t look at a leaderboard, because it helped to just free me up to keep doing what I was doing.”

Harmon, the winner earlier this year at the SIGA Dakota Dunes Open presented by SaskTel, pulled even with Silvers with a birdie on 17, then gave himself a look for the outright win at the 18th with an 8-foot birdie putt. The putt hung on the lip, however, giving Silvers life in a sudden victory playoff.

“Luckily I was on the driving range, or I would have had a heart attack,” said Silvers. “Matt played great. We played together yesterday, and he had an awesome four days.”

At No. 10 on the Order of Merit, the win moves Silvers in position to earn an exemption into the final stage of Web.com Tour Q-School. The 27-year old University of South Carolina grad admitted he had a bleak outlook at the beginning with the week, faced with the prospect of losing his status on Tour for next year.

“This is where you want to be. PGA Tour Canada is huge now, with world ranking points and the opportunity to move up to the Web.com Tour or the PGA Tour. To get a win with such good players in the field really is amazing,” said Silvers.

Harmon’s second place check vaulted him over Brock Mackenzie into third on the Order of Merit, within $817 of No. 2 Tim Madigan with one event to go. Harmon, Madigan and Mackenzie are all within striking distance of leader Joel Dahmen’s $79,687 total should they be able to win the Tour Championship of Canada presented by Freedom 55 Financial next week.

Two shots back of the playoff were West Vancouver, BC’s Seann Harlingten, Montreal, Quebec’s Beon-Yeong Lee and McCarthy, a Syracuse, New York native, at 13-under.

With a final round 7-under 65 and a 13-under total, 25-year old Beon-Yeong Lee of Montreal, Quebec claimed Freedom 55 Financial Canadian Player of the Week honours on Sunday, along with a $1,500 prize.