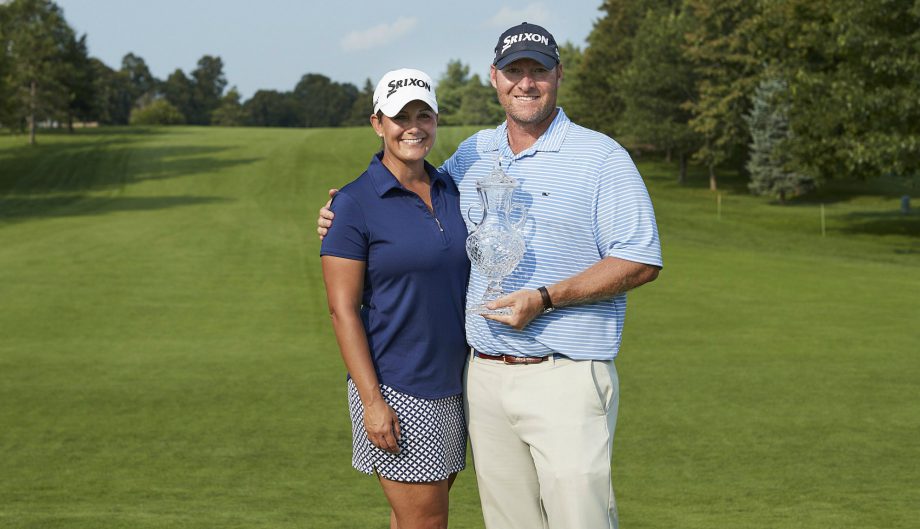 Maysville, Kentucky’s Mark Blakefield shot a final round 6-under 65 on Sunday at Hylands Golf Club to win the National Capital Open to Support Our Troops, his first Mackenzie Tour – PGA TOUR Canada victory.

The 35-year old took control of the tournament with birdies on seven of eight holes in the middle of his round, then converted tricky up-and-downs for par on the final two holes to win by two over Dallas, Texas’ Kramer Hickok.

“You get gotta get it done, one way or another. Winning’s never easy, and hardly ever do you just get a walk in the park to the 18th green. Sometimes you have to come up with something when you need it,” said Blakefield, who finished at 20-under for the week.

.@MBlakefield's short game came through when it mattered most.

Starting the day one stroke back of 54-hole leader Charlie Danielson, Blakefield started slowly but quickly picked up the pace with birdies on holes No. 5-9, eventually reaching 20-under with three more birdies on the back nine.

With the tournament firmly in his grasp and the tough, into-the-wind par-4 17th and 18th holes left, the University of Kentucky grad converted a sand save from the greenside bunker on the penultimate hole and a tricky up-and-down from left of the green at 18 to secure the title.

“Obviously it was a great week and I played great, but the one thing was that I threw a few shots away with some bad up-and-downs that I didn’t get. To get those two on the last two holes was fantastic, especially to make those two putts when I needed them,” said Blakefield.

The win comes at a special time for Blakefield and his fiancée, professional golfer and former Big Break champion Bri Vega, who has caddied for her future husband at six events this year, including this week.

“It’s funny, she tried to stay so calm, but I could just see right through it and knew she was a nervous wreck just like I am,” said Blakefield with a laugh, adding that her perspective as a player was a valuable asset this week. “Sometimes, even if you know what a putt does, it’s nice to hear it from somebody else who says the same thing.”

Blakefield was making his eighth career start on the Mackenzie Tour this week. The University of Kentucky grad earned conditional status with a T9 finish at the USA East #1 Q-School this spring and had made five of seven cuts this year, including a previous season-best T11 finish at the Staal Foundation Open presented by Tbaytel.

Hickok, who could have forced a playoff with a miracle eagle at 18, settled for par and managed a 4-under 67 to finish in solo second, moving into first place on the Order of Merit. Blakefield’s win moved him into the seventh spot with three events remaining in the 2017 season.

Hanging at the top.

Kramer Hickok sits at No.1 on the Order of Merit after his solo-second result at the @NatCapitalOpen pic.twitter.com/QY38AP5B7P

With a total score of 11-under par in a tie for 12th, Kimberley, British Columbia’s Jared du Toit finished as the top Canadian on the leaderboard, earning Freedom 55 Financial Canadian Player of the Week honours and a $2,500 prize.